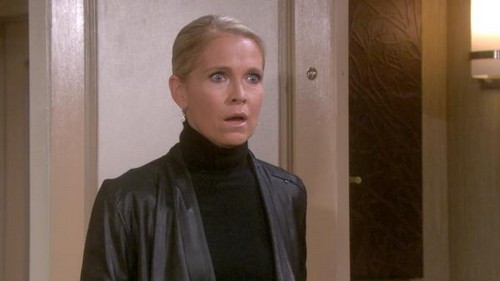 “Days of Our Lives” spoilers for Wednesday, March 4, hint that JJ (Casey Moss) will attempt to explain his actions to Jennifer (Melissa Reeves), but he’ll undoubtedly face an uphill battle. Jennifer is livid after finding JJ in bed with Eve (Kassie DePaiva) and there’s likely no rational explanation that Jen would ever accept. Still, JJ will make an effort to smooth things over with his mom in hopes that Jennifer won’t tell Paige (True O’Brien) what she knows.

However, JJ and Jennifer won’t realize that Paige is standing at the other end of the square listening to the whole thing. Will one of them let Eve’s name slip as the argument ensues? Since the rumors say Jen may force Eve to spill the beans, it sounds like Paige won’t find out just yet. Still, DOOL fans will want to tune in to watch Paige’s suspicions grow.

Other “Days of Our Lives” spoilers for Wednesday, March 4, tease that Hope (Kristian Alfonso) and Aiden’s (Daniel Cosgrove) relationship will get the stamp of approval from someone unexpected. We don’t know exactly who it will be, but it’s possible that Kayla (Mary Beth Evans) has come around to the idea of them being together. Maybe she’s starting to believe that Aiden is a good guy in spite of Bree’s (Marie Wilson) claims. Then again, it’s possible that someone who’s been out of the loop could suddenly be inserted into the “Haiden” storyline. Regardless of who offers support, “Days” viewers will be glad to know that Hope and Aiden have someone in their corner.

Meanwhile, Serena (Melissa Archer) will resume her mission to get Eric’s (Greg Vaughan) elephant statue. After learning that the elephant was given to Daniel (Shawn Christian), perhaps Serena will try to take advantage of the situation. It’s tough to say what her next move will be, but DOOL watchers know Serena will stop at nothing to get her hands on the goods. Check out the Wednesday, March 4 episode of “Days of Our Lives” to see if Serena will become one step closer to completing her mission.

As Serena makes her final push, Theresa (Jen Lilley) will be pushing Melanie (Molly Burnett) for information. Theresa will find out about Melanie’s investigation into Dr. Mandrake (Sal Landi) and will try to uncover exactly what Melanie knows. Kristen (Eileen Davidson) is expected to return to Salem later this month so we’ll have to see if Theresa will learn any news about her stolen embryo before Kristen arrives.

So “Days” fans, what do you think about JJ’s attempt to explain? Who’s going to approve of Hope and Aiden’s relationship? Can Serena pull off her scheme? Will Melanie help Theresa discover the truth about her baby? Let us know what you think in the comments below and don’t forget to check CDL tomorrow for the latest “Days of Our Lives” spoilers, rumors and news.