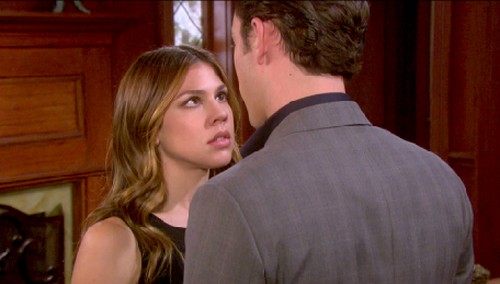 “Days of Our Lives” spoilers tease that the week of February 23-27 will be another exciting one on the NBC soap, and packed full of must-see drama. Rumors have been floating around for weeks now regarding who the father is of Paul Narita. According to “Days of Our Lives” spoilers and coming and going news, Paul’s mother Tori will arrive in Salem – and the part will be played by Hira Ambrosina. DOOL spoilers tease that there could be some truth to the rumors that Paul’s father lives in Salem – because Tori runs into someone she used to know.

“Days of Our Lives” spoilers for the week of February 23 tease that the complicated relationship between JJ and Paige continues to get messier when JJ introduces his former flame to his new “girlfriend.” Paige is shocked when she learns that JJ is moving on, or he appears to be anyways, so she finds herself seriously contemplating Cole’s invitation to go out on an official date with him.

In other “Days of Our Lives” news, spoilers reveal that the week of February 23 will be a busy one for Theresa Donovan (Jen Lilley). Theresa’s BFF Anne is at war with Brady (Eric Matsolf) and Theresa finds herself faced with a precarious decision – should she help Brady out or remain loyal to one of her only friends in Salem? Also, the drama between Theresa and Melanie (Molly Burnett) escalates when Theresa confronts her about Dr. Mandrake.

Some of our favorite Salem couples are in for some serious drama during February 23-27 as well, spoilers tease that Will and Sonny’s marriage hits rock-bottom, and Nicole continues to try and win back Daniel with some help from Melanie. Meanwhile, Jordan (Chrishell Stause) overhears Kate and Chad bickering and learns that her current boyfriend sold out her ex-boyfriend Rafe, which does not go over well.

So, DOOL fans, who do you think Tori Narita knows in Salem, is it Paul’s father? Will Paige (True O’Brien) hook up with Cole because she thinks JJ has moved on? Is this the end of Will and Sonny? What about Chad and Jordan? Let us know what you think in the comments below and don’t forget to check CDL tomorrow for more “Days of Our Lives” spoilers and news.