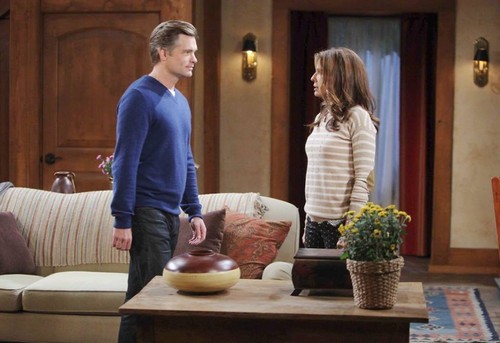 “Days of Our Lives” spoilers tease that March 9-13 will be another exciting week of drama on the NBC soap, not that there is ever a dull day in Salem. DOOL spoilers reveal that a secret will begin to surface in the less than sleepy town, and one Salemite will bid farewell, meanwhile the fall out from Eve (Kassie DePaiva) and JJ’s affair continues to wreak havoc. According to “Days of Our Lives” spoilers, this is what DOOL fans can expect to see during the week of March 9.

Monday, March 9: “Days of Our Lives” coming and going news confirmed months ago that Jordan Ridgeway was leaving Salem, and Chrishell Stauss’s time on the NBC soap had come to an end. According to DOOL spoilers, Jordan’s final air date will be on March 9, and the character will exit after sharing an emotional goodbye with Rafe, and one last fiery scene with her wretched father Clyde.

Tuesday, March 10: On Tuesday’s episode of “Days of Our Lives,” spoilers tease that fans of the NBC soap can expect to see former Salem detective putting his police skills to good use and realizing that Victor Kiriakis is up to no good – and Rafe is onto his game. Meanwhile, Paul Narita (Sean Christopher) realizes that his mother Tori is walking on eggshells in Salem and trying to avoid certain people.

Wednesday, March 11: DOOL spoilers for Wednesday reveal that Chad DiMera (Billy Flynn) and Abigail Deveraux (Kate Mansi) will be forced together again when he plays the part of her knight in shining armor. Meanwhile across town, all hell breaks loose when Serena (Melissa Archer) and Nicole bump heads and unknowingly foil each other’s schemes. Also, Melanie (Molly Burnett) and Brady have a long overdue chat.

Thursday, March 12: Thursday’s episode of “Days of Our Lives” finds troublemaker Theresa Donovan and Brady (Eric Matsolf) in the midst of some major drama. Across town fans of the NBC soap can expect to see Serena Mason and Nicole (Arianne Zucker) continue bump heads, may the best woman win.

Friday, March 13: “Days of Our Lives” spoilers and coming and going news tease that Joseph Moscolo will be back in Salem as Stefano DiMera, and he heads to a DiMera board meeting and bumps heads with Kate. Spoilers tease that Kate is blindsided by Stefano’s return and could lose control of the company. Spoilers also tease that on March 13th DOOL fans can expect to see Theresa and JJ in a war of words, after Theresa (Jenn Lilley) confronts her sister and niece’s beau.

So DOOL fans, do you think that Paul will figure out his mother’s secret? Will you miss Chrishell Stauss, or are you happy to see Jordan go? Is this the end of the line for Brady and Melanie? Will Stefano put Kate in her place? Let us know what you think in the comments below and don’t forget to check CDL tomorrow for more “Days Of Our Lives” spoilers and news.