‘Days of Our Lives’ Spoilers: Theresa Jealous of Nanny – Adrienne Opens Up to Lucas – Awkward Picnic for Chad and Abigail 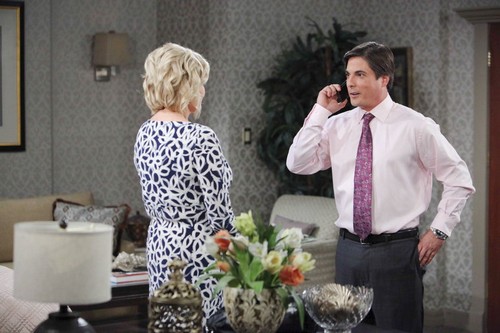 “Days of Our Lives” spoilers for Thursday, July 9, tease that Theresa (Jen Lilley) won’t be pleased when she sees how close Brady (Eric Martsolf) and Tate’s nanny have become. Theresa can’t bond with Brady if someone else is in the way. However, there could be a silver lining in this situation. Theresa is planning on staging a scare involving Tate to make Brady lean on her for support. If she plays her cards right, Theresa might be able to pin the fake wrongdoing on the nanny. Theresa would be in the clear and Brady would think she’s a caring mom. It sounds like the perfect plan, but we all know something’s bound to go awry. Nevertheless, Theresa will soon recruit Anne (Meredith Scott Lynn) to help her put her scheme into action.

Meanwhile, Lucas (Bryan Dattilo) will have a chat with Adrienne (Judi Evans) about her impending divorce. Adrienne was clearly upset about Justin’s (Wally Kurth) steps to end their marriage. DOOL spoilers say Lucas will question whether Adrienne is really ready to move on. Adrienne will likely admit that it’s been difficult to work through this process. Still, Adrienne cares about Lucas and she probably just needs some time to come to terms with the finality of it all. On the other hand, this may not be as final as it seems. “Days” rumors hint that there could be hope for Justin and Adrienne down the road. Lucas should proceed with caution. Some major heartbreak may be coming up on “Days of Our Lives.”

Other DOOL spoilers indicate that Paul (Christopher Sean) and Will (Guy Wilson) will have another shouting match. Will wanted Sonny (Freddie Smith) to see Paul and Derrick (Spencer Neville) on a date by the lake. Sonny got an eyeful of Derrick and Paul’s glistening six-packs and now a huge confrontation is brewing. Will hoped Sonny would see that Paul was starting to play the field. Instead, Sonny’s attention will undoubtedly be focused on Will’s continued insecurities.

As tempers flare for Will and Paul, things will get awkward for Chad (Billy Flynn) and Abigail (Kate Mansi). Chad and Zoe (Miranda Mayo) will meet up with Abigail and Ben (Robert Scott Wilson) at the summer picnic, but the afternoon should be anything but fun. Abigail will feel so anxious by the whole ordeal that she ends up getting sick to her stomach. Unfortunately, it’s much more than nerves. Abigail is about to find out she has a baby on the way. Stay tuned to “Days of Our Lives” to watch Abigail get updates on her pregnancy.

So “Days” fans, what do you think about the news that Theresa will have an issue with Tate’s nanny? Will Theresa be able to get rid of her? Does Adrienne truly want to end her marriage? Is Will messing up his last chance with Sonny? Will Abigail’s nervousness soon be replaced by total panic? Let us know what you think in the comments below and don’t forget to check CDL tomorrow for the latest “Days of Our Lives” spoilers, rumors, updates and news.