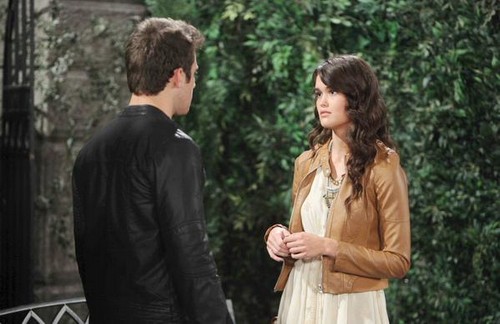 “Days of Our Lives” spoilers tease that February 23-27 will be another dramatic week in Salem, and DOOL fans will not want to miss a single episode of the NBC soap. There’s never a dull day in Salem, but spoilers tease some extra juicy storylines headed viewers’ ways. According to “Days of Our Lives” spoilers, this is what you can expect to see during the week of February 23.

Monday February 23: DOOL spoilers reveal that on Monday’s episode of the NBC soap, Serena Mason (Melissa Archer) is in some major trouble when she discovers that Eric has given away the elephant statue. Meanwhile across town, Brady (Eric Martsolf) finds himself feuding with Anne, and Theresa Donovan comes to her old flame’s rescue.

Tuesday February 24: According to “Days of Our Lives” spoilers and coming and going news for Tuesday February 24, Hira Ambrosino makes her Salem debut as Paul’s (Sean Christopher) mother Tori. Rumors have been floating around teasing that Paul’s father already lives in Salem, and according to DOOL spoilers Tori runs in to an old friend while she is in town – so there very well may be some truth to those rumors.

Wednesday February 25: “Days of Our Lives” spoilers for the February 25 episode of the NBC soap reveal that on Wednesday DOOL fans can expect to see Melanie meddle in her father Daniel’s love life and tries to convince him to forgive Nicole (Arianne Zucker). Across town a desperate Will begs his husband Sonny Kiriakis to forgive him, and the young couple’s marriage is in serious trouble.

Thursday February 26: DOOL spoilers tease that on February 26 JJ and Paige (True O’Brien) share an awkward run-in and he introduces Paige to his “new girlfriend.” It is safe to assume that JJ isn’t being 100% truthful and revealing that his “girlfriend” is actually her mother Eve Donovan (Kassie DePaiva).

Friday February 27: According to “Days of Our Lives” spoilers for Friday’s episode of the NBC soap, Paige is thrown for a loop by JJ moving on with his new girlfriend, or so he claims, but she recovers quickly when Cole asks her out on an official date. Meanwhile across town spoilers tease that on February 27 Theresa (Jenn Lilley) and Melanie (Molly Burnett) bump heads once again when Theresa confronts her about Dr. Mandrake.

So “Days of Our Lives” fans, who do you think Paul’s father is? Will Sonny forgive his hubby Will, or is this the end of their marriage? Will Brady and Theresa start getting close again? How will JJ react to Paige dating Cole? Let us know what you think in the comments below and don’t forget to check CDL tomorrow for more “Days of Our Lives” spoilers and news.