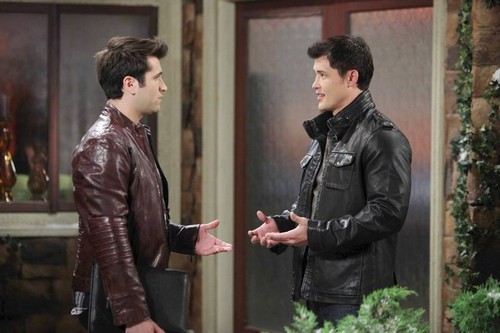 “Days of Our Lives” spoilers for Wednesday, April 8, tease that Victor (John Aniston) will rip into Will (Guy Wilson) for his betrayal of Sonny (Freddie Smith). DOOL fans know that Victor doesn’t let anyone get away with hurting a Kiriakis. Victor will lay down the law and issue Will a stern warning. If Will doesn’t straighten up and treat his husband with the respect he deserves, he’ll have to answer to Victor.

Will is trying to clean up his act to some extent, but his career ambitions and jealousy of Paul (Christopher Sean) keep getting in the way. It appears Will’s last article attempt could come back to haunt him. “Days of Our Lives” spoilers hint that Sonny will make a shocking discovery on Will’s tablet. It looks like Will didn’t delete all his research on Paul’s paternity. The fact that Will went behind his back again undoubtedly won’t sit well with Sonny. A good marriage is built on trust and understanding, but Will has been focused on secrets and lies. Later this week, Sonny will inevitably be drawn closer to Paul when he tells him that Tori (Hira Ambrosino) has been lying.

Now that the news of Will and Paul’s affair is being published, Will is going to face damage to his career. Sleeping with the subject of his article certainly won’t win Will any awards. The rumors say that by the time all of this is over, Will could end up heartbroken and alone. The story Will thought would be his big break turned out to be a big bust. Stay tuned to “Days of Our Lives” to find out what the future holds for Will.

Other “Days of Our Lives” spoilers indicate that Paige (True O’Brien) will confront Eve (Kassie DePaiva) about the jacket she found in her apartment. Paige will likely ask Eve the same question “Days” viewers are wondering: why in the world would she steal that coat from the charity drive? Eve can’t exactly tell Paige she wants it as a memento of her hot fling with JJ (Casey Moss). Still, Eve will probably come up with something that will appease Paige for the time being. Stick with DOOL to see how long Eve can cover her tracks.

So “Days” fans, what do you think about Victor’s warning for Will? When Sonny gets updates about the article Will was working on, will there be any hope for their relationship? What about Paige confronting Eve? What explanation could Eve possibly give? Let us know what you think in the comments below and don’t forget to check CDL tomorrow for the latest “Days of Our Lives” spoilers, rumors, updates and news.