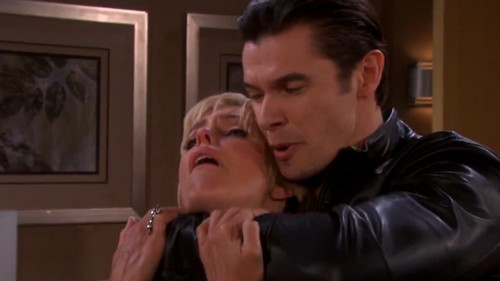 “Days of Our Lives” spoilers reveal that Xander (Paul Telfer) will snap and rip into Nicole (Arianne Zucker) for trying to deceive him. Nicole thought she covered her tracks, but she didn’t do a very job keeping her investigation under wraps. Now Xander knows that Nicole was just trying to get close to him to learn his secret. Unfortunately, that means Nicole will have to pay the price.

DOOL spoilers tease that Xander’s menacing side will come out in full force. Xander will grab Nicole and threaten her life for daring to dig behind his back. However, “Days” viewers know that Nicole is a strong-willed woman who always puts up a fight. At the last minute, Nicole will break free from Xander’s deadly grip and try to make a run for it. Nicole will reach out to Eric (Greg Vaughan) and tell him the whole story in hopes that he can save her from Xander’s fury. Eric and Nicole will try to give Xander the slip, but he doesn’t intend to back down. If it’s up to Xander, he’s the only one who’s getting out alive. Luckily, it doesn’t look like Xander will get his way.

Of course, we know Paul Telfer’s last air date as Xander will be in August. If anyone’s going to bite the dust as a result of all this, it’s going to be him. Obviously, it won’t be now, but it could still happen down the road. We don’t know for sure if Xander will be killed off or just be sent to prison for his crimes, but he’s going down either way. In fact, you can bet that the end of the road is coming for both Xander and Serena (Melissa Archer). Nevertheless, Serena will make it her mission to destroy Nicole’s happiness before she heads out.

“Days of Our Lives” spoilers indicate that Serena will tip off Daniel (Shawn Christian) to a close moment she witnesses between Nicole and Eric. Daniel is already going to be pretty ticked that Nicole chose to open up to Eric instead of him. It sounds like this could be Daniel’s final confirmation that Nicole really isn’t over her former flame. Nicole may grovel again and get one more chance, but DOOL rumors hint that her relationship with Daniel is winding down. Stick with “Days of Our Lives” to see if Nicole’s dangerous encounter with Xander will put her life on a different path.

So “Days” fans, what do you think about the news that Xander will resort to violence against Nicole? Will Eric save the day? How will Daniel feel when he gets updates on all of this? Will Daniel be hurt that Nicole kept him out of the loop? Will Nicole end up back with Eric later on? Let us know what you think in the comments below and don’t forget to check CDL tomorrow for the latest “Days of Our Lives” spoilers, rumors, updates and news.

Watch this Days of Our Lives video preview for week of June 8, 2015 below