Days of Our Lives (DOOL) Spoilers: Eduardo Admits Mission to Murder John – Is There a Way Out? 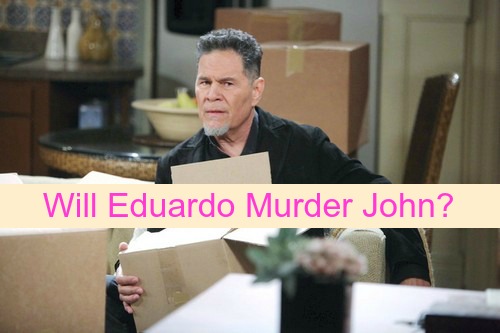 “Days of Our Lives” spoilers (DOOL) reveal that John (Drake Hogestyn) is in for a major shock. After Paul (Christopher Sean) told him that Eduardo (A Martinez) went to Winterthorne Academy, John thought he’d found a decent lead on his past. Unfortunately, John reached a dead end when Eduardo said he didn’t remember much about his time there. Nevertheless, it appears John is about to get some answers after all.

DOOL viewers know that a mysterious organization has hired Eduardo for a mission involving John. “Days of Our Lives” spoilers say Eduardo will make a stunning confession about what they’re asking him to do.

Eduardo will admit that the organization wants him to kill John because he’s been poking around. John will be taken aback by the news, but Eduardo will believe they might be able to work out a mutually beneficial deal.

Eduardo desperately wants to leave this murderous lifestyle behind. It seems “Days” fans now know why Eduardo abandoned both of his families. The organization probably threatened to hurt or kill his kids if he didn’t play by the rules.

Of course, Eduardo might’ve just been ashamed by the blood on his hands. Eddie clearly wasn’t a respectable role model. However, Eduardo is hoping to have a fresh start in Salem and he’s certainly not going to get one by murdering John Black.

DOOL spoilers indicate that Eduardo will agree to tell John about his past. Eduardo was given a tablet containing a full background on John, which means he has most of what John needs to know right at his fingertips. Once Eduardo has spilled all the details, he’ll suggest he can tell the organization that John just wanted more info on his history. There was no other motive for the digging he’s been doing.

Chances are good that Eduardo’s plan won’t turn out well. It’s tough to believe that the people Eduardo works for are really going to accept the explanation of “Oh, don’t worry. John’s cool.” Instead, the organization might remind Eduardo of what he stands to lose if he doesn’t complete his mission.

If Eduardo has to make a choice between killing John or letting someone come after his family, you can bet that he’ll choose the former. Otherwise, it sounds like Rafe (Galen Gering), Gabi (Camila Banus) and even Arianna (Harper and Sydney Udell) could be at risk. Stick with “Days of Our Lives” for updates on Eduardo’s efforts to keep his loved ones safe.

So “Days” fans, what do you think about Eduardo’s mission to kill John? Will Eduardo’s alternative idea work or will he have to make a deadly decision? Will John be surprised by the info on his past? Let us know what you think in the comments below and don’t forget to check CDL often for the latest “Days of Our Lives” spoilers, updates and news.