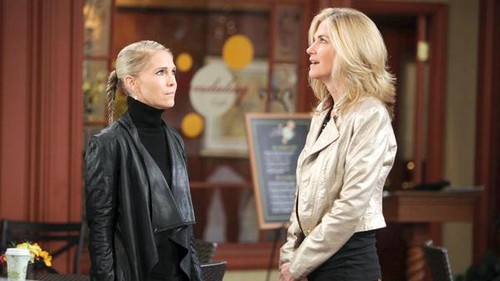 The latest “Days of Our Lives” spoilers for Tuesday, March 3, hint that things are about to get worse before they get better for Eve (Kassie DePaiva) and JJ (Casey Moss). The unlikely lovers were able to cover their tracks for months, but the “Jeve” affair has finally been discovered. Unfortunately for JJ, his own mother walked in on him in the middle of an afternoon delight.

“Days of Our Lives” spoilers tease that both Eve and JJ will defend their actions, though Jennifer (Melissa Reeves) isn’t likely to buy what they’re selling. Jen seems to think her children are saints so you can bet the majority of the blame will fall on Eve. Still, JJ isn’t going to get off lightly. The fallout of the affair will continue all week on DOOL as Eve and JJ try to convince Jennifer to keep everything a secret from Paige (True O’Brien). The rumors say Jen will force Eve to clue Paige in so “Days” fans will want to pass the popcorn for that.

While Eve prepares for a difficult admission, Eric (Greg Vaughan) will be making one of his own. “Days of Our Lives” spoilers for Tuesday, March 3, indicate that Eric will make a startling confession to Nicole (Arianne Zucker). We don’t know exactly what he’ll come clean about, but it probably has something to do with his relationship with Serena (Melissa Archer). Eric gave Nicole a hard time about investigating Serena’s past and confronting her with seemingly bogus information. However, Serena’s been acting awfully suspicious since then.

First, Serena flew off the handle when Eric planned a romantic getaway that involved leaving his apartment (and his elephant statue) behind. As if that wasn’t odd enough, Serena also argued with Eric about getting the elephant back after he gave it away. Is Eric finally coming around to the idea that Serena is up to no good? It’s tough to say, but Serena’s erratic behavior certainly isn’t helping her carry out her scheme. Check out the Tuesday, March 3 episode of DOOL to find out if Eric will confess that Nicole might be right about Serena’s shady intentions.

So “Days” fans, what do you think about the news that Eve and JJ will make excuses for their affair? Will Jennifer’s knowledge of their hookups force Eve to tell Paige what’s been going on? If Paige finds out, will there be any way for her to salvage her relationship with JJ or Eve? What about Eric’s admission? Will Eric tell Nicole that he may be wrong about Serena? Let us know what you think in the comments below and don’t forget to check CDL often for the latest “Days of Our Lives” spoilers, rumors and news.