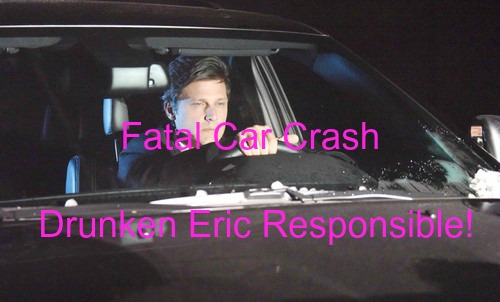 “Days of Our Lives” spoilers for Thursday, December 31, tease New Year’s Eve will take a disastrous turn in Salem. Everyone has been having a great time at Basic Black’s fashion show and relaunch party, but things will go downhill fast.

Eric (Greg Vaughan) has already been drinking and DOOL buzz suggests that he’ll continue to chug throughout the night. There’s a good chance we’ll see other characters confront Eric about his behavior.

Unfortunately, it appears Eric won’t take their words to heart. “Days of Our Lives” spoilers indicate that Eric will get behind the wheel in an inebriated state. A huge car crash will occur, which means Eric could find himself in major trouble.

We don’t know for sure if Eric will cause the accident, but it seems likely. Jennifer (Melissa Reeves), Brady (Eric Martsolf) and Daniel (Shawn Christian) will also be involved in the collision. Daniel will eventually die as a result of his injuries. “Days” is ending the year on a very dramatic note!

Meanwhile, alcohol could lead to big problems for Belle (Martha Madison) as well. After boozing it up with Chad (Billy Flynn), Belle will decide to throw caution to the wind and return to Chad’s hotel room.

That’s where Abigail (Kate Mansi) will interrupt their love session to deliver the news about Thomas. Chad is in for quite a shock when he finds out he’s the true father of Abigail’s baby. That is, of course, if Abby can get Chad to believe it.

Elsewhere, Nicole (Arianne Zucker) will finally have enough of Kate’s (Lauren Koslow) constant criticism and her need to be in control. This is a three-way partnership and Kate needs to start acting like a team player.

It’s clear that Kate is hoping Theresa’s (Jen Lilley) designs won’t receive favorable write-ups. For all we know, Kate could be trying to pay people to put out scathing reviews. Kate would love nothing more than to see Theresa fail. She still has her preferred designer waiting in the wings.

DOOL spoilers say Nicole will rip into Kate for how she’s been behaving. Theresa wants to squeeze Kate out and Nicole might get on board with idea if Kate doesn’t straighten up. Will Kate change her tune or will she find herself looking for a new job soon? Stick with “Days of Our Lives” for updates on Kate’s future at Basic Black.

So “Days” fans, what do you think about the horrible car accident that’s coming? Will life come to a screeching halt in Salem? Will Chad believe Abigail’s news? Can Nicole take Kate down a peg?