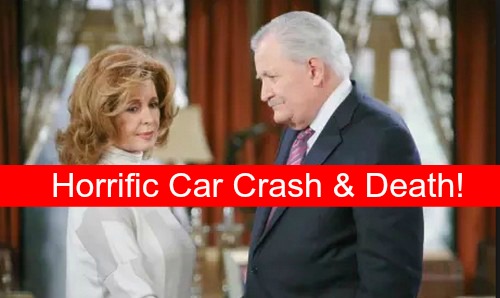 “Days of Our Lives” spoilers reveal that a horrific car crash will put a damper on the New Year’s Eve festivities. It appears several DOOL characters could get caught in a pileup. We know for sure that Jennifer (Melissa Reeves) will be involved. By the time it’s all over, one Salem resident will be a goner.

Since Daniel’s (Shawn Christian) last airdate is estimated to be around the beginning of January, there’s a good chance he’ll die as a result of the collision. The details of the whole ordeal are being kept under wraps, but there’s been some buzz about how this storyline might go.

In an interview with Serial Scoop, Greg Vaughan indicated that a big gathering would create questions about Eric’s drinking.

Perhaps Vaughan is referring to the New Year’s Eve fashion show, which will undoubtedly have most of Eric’s loved ones in attendance. We know that Eric will become defensive when his friends and family members try to stage an intervention.

Maybe a very intoxicated Eric will leave the event in a huff. That might send Daniel driving after him or even prompt him to get in the same car. All of a sudden—BOOM! We could have the crash that changes everything.

Since Jennifer will watch the accident play out, she may be a witness to the tragic consequences of Eric’s alcoholism. It’s possible that Jen will end up getting injured as well. “Days of Our Lives” spoilers tease that Maggie (Suzanne Rogers) will soon have to make a difficult decision that affects two people who are close to her.

Daniel has often been portrayed as a hero on “Days.” It sounds like Dr. Dan’s last heroic act could be donating his organs so that someone else can live. Will Jennifer be the one who benefits from Daniel’s sacrifice? It’s definitely a plausible option.

We might want to consider Victor (John Aniston) as a potential organ recipient since Caroline (Peggy McCay) has been predicting his heart attack. However, it seems DOOL is setting up Philip’s (John-Paul Lavoiser) risky business strategy as the instigator. It may be a little early to see the aftermath of that.

Besides, a heart transplant would be unusual for an individual in Victor’s age bracket. Of course, this is Salem. Stranger things have happened. Still, someone like Jennifer is probably a safer bet.

Whatever the case, you can expect intense action and tear-jerking drama on the NBC soap. Many lives will be torn apart by the heartbreaking events that unfold. Stick with “Days of Our Lives” for updates on the chaos ahead.

So “Days” fans, what do you think about the news that a car crash will lead to the death of a major character? Will Daniel be killed by drunk-driving Eric? Will Maggie decide to donate a possibly brain-dead Daniel’s organs?