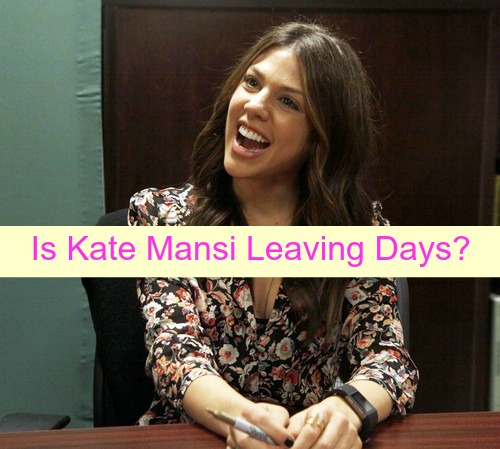 “Days of Our Lives” spoilers tease that DOOL viewers will have to brace themselves for another exit. There’s been a lot of hiring and firing going on at “Days” lately, but this time one actor or actress is choosing to step out of Salem.

Serial Scoop is reporting that a popular cast member will be leaving the show when his or her contract expires in the near future. This should be a pretty big deal due to his or her character’s front-burner storyline. The departure news has fans wondering who might be bowing out.

We don’t know for sure which DOOL star is exiting, but the rumors suggest that Kate Mansi may be leaving the role of Abigail. Unless Mansi renewed her contract under the radar, it appears it will expire in December 2015. This would be a tough loss for “Chabby” fans. Chad (Billy Flynn) and Abigail have become a beloved pairing without even being a full-fledged couple at the moment.

“Days of Our Lives” spoilers indicate that Ben (Robert Scott Wilson) will soon be out of the picture thanks to his murderous tendencies and kidnapping plot. Chad will finally have a chance to be with the woman he loves. Will Chad’s dream get ripped away when Abigail leaves Salem? Most viewers hope not! Since Abigail’s baby is probably Chad’s, that would add an extra layer of drama to all of this.

If the rumors are true, there are logical ways to explain Abigail’s exit. For example, the baby could die and Abigail could depart to “find herself.” However, that would be awfully cruel considering Chad already lost a child. Abigail could also check into a mental health facility after all the emotional turmoil she’s been through with Ben. That might be an option if they wanted Chad’s son or daughter to remain in his custody.

Of course, Abigail could be killed off or even recast. Whatever the case, many DOOL watchers will be heartbroken if they have to say goodbye to Mansi and Flynn’s chemistry. Sometimes you just strike gold with a particular pair of cast members and the result is simply magic.

Still, it would be difficult to lose Abigail entirely. “Days of Our Lives” needs to add to the 20-something set rather than let it dwindle. Perhaps the best tactic would be to write Abigail out for a reasonable period of time before making a major decision.

Who knows? Mansi might return down the road. Plenty of soap stars tend to head back home eventually. For now, everyone will be waiting to see if Mansi signs on the dotted line. We’ll keep our fingers crossed and give you updates if we hear confirmation either way.

So “Days” fans, what do you think about the news that a popular actor or actress is leaving the NBC soap? Is Kate Mansi’s departure imminent? If Mansi exits, would you be on board with an Abigail recast or are you too attached to Mansi’s version? Let us know what you think in the comments below and don’t forget to check CDL often for the latest “Days of Our Lives” spoilers, rumors, updates and news.

Stars of ‘Days Of Our Lives’ attend a book signing at Barnes And Noble – 5th Avenue on October 27, 2015 in New York City. Diane Cohen/FAMEFLYNET PICTURES