Days of Our Lives (DOOL) Spoilers: Jason Cook is Back as Shawn Douglas Brady – Suspicious of Aiden, Overjoyed by Bo’s Return! 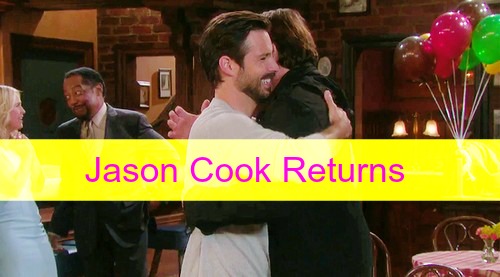 It looks like an additional fan favorite will be returning later this month with questions of his own. Bo’s son, Shawn (Jason Cook), will head back to Salem in October to get the scoop. “Days” spoilers indicate that Shawn will be curious about what really happened to his dad.

Steve went on a rescue mission, but he was only able to bring home bad news. Though Steve believes Bo is dead, Shawn might be a little hesitant to accept that his father is truly gone. Shawn didn’t see the tape with his own eyes and the Bradys can usually sense when another Brady is in trouble.

We’ve recently seen Caroline (Peggy McCay) having visions of Bo in danger. Likewise, Bo has been having vivid dreams of upcoming peril for Hope (Kristian Alfonso). Maybe Shawn will have a similar connection to his old man and realize there’s still a chance Bo is trying to get back to him.

Unfortunately, Hope hasn’t felt any real mental link to Bo in a long time. Perhaps Hope is just too blinded by her current love to focus on the one that got away. Aiden (Daniel Cosgrove) is a sly fox and he’s playing Hope like a fiddle. However, Hope’s suspicions about her fiancé will soon be on the rise. Aiden lied about his gambling debts and Clyde’s (James Read) brutal attack. Hope will begin to wonder what else Aiden is hiding.

Of course, “Days of Our Lives” viewers know that Aiden’s biggest lie is yet to be revealed. Hope has no idea that her whole relationship is basically a sham. When Shawn shows up, he won’t be impressed with the man Hope intends to marry. Much like Steve, Shawn will disapprove of Aiden and all his shadiness. Plus, Shawn will undoubtedly feel like his parents were soulmates. Bo and Hope had that special something that creates daytime drama magic.

Luckily, Hope and Bo will be reunited in the near future. Bo broke free from his captors and shouted that he was going home. Nevertheless, Bo could run into a few snags on his way to freedom. DOOL rumors hint that some type of showdown may be brewing.

Steve might save the day if Shawn can convince him that he’s mistaken. One thing’s for certain: Bo is very much alive and he’s coming back to his family. Stick with “Days of Our Lives” to see Bo’s reunion with Hope, Shawn and Ciara (Vivian Jovanni).

So “Days” fans, what do you think about Shawn’s imminent return? Are you glad Shawn will pick up on the fact that something’s up with Aiden? How will Hope react when she gets updates on the reason Bo’s been missing for so long? Let us know what you think in the comments below and don’t forget to check CDL often for the latest “Days of Our Lives” spoilers, rumors, updates and news.