Days of Our Lives Spoilers: Joseph Mascolo Out at DOOL, Stefano DiMera Killed Off? 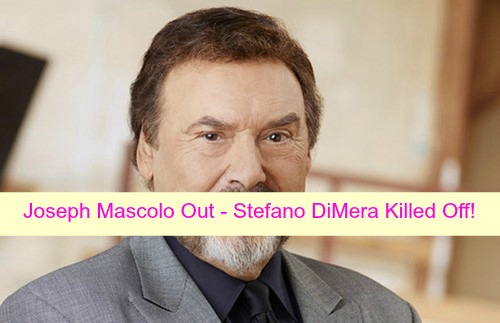 “Days of Our Lives” spoilers tease that we could see another horrific death in Salem. There’s certainly been no shortage of characters getting killed off this year. Kristen (Eileen Davidson) is presumed dead after a scuffle with Marlena (Deidre Hall) and a tumble down a mountain.

Serena (Melissa Archer), Paige (True O’Brien) and Will (Guy Wilson) were all victims of the necktie killer. Aiden (Daniel Cosgrove) died in a recent showdown and Bo (Peter Reckell) will soon wrap up his stint after he loses his battle with a brain tumor.

Now it seems the great Stefano DiMera (Joseph Mascolo) could bite the dust.

DOOL insider reports suggest that Mascolo’s health began to deteriorate and the producers felt it was best to let the 86-year-old actor go. According to GLOBE’s November 23 issue, “Days” insiders say the decision wasn’t easy.

It had to be tough to fire a powerhouse performer like Mascolo. Nevertheless, many viewers expected this might be coming. When Andre (Thaao Penghlis) retuned to the NBC soap and was rewritten as Stefano’s son, it was easy to see that a change in family leadership was on the way.

Andre has already stepped up to carry out Stefano’s schemes and he’ll undoubtedly be instigating some of his own once Stefano is gone. It’s difficult to imagine “Days of Our Lives” without the iconic Stefano, but Andre is a suitable successor.

However, Andre probably shouldn’t get too comfortable with his newly established patriarch status. Word has it that producers changed their minds a couple weeks after filming Stefano’s death scene and now he could pop back up as a ghost.

If the reports are true, Stefano’s death may be tied to a nasty battle that’s looming. “Days of Our Lives” spoilers reveal that a revenge plot will soon be in the works. Bo (Peter Reckell) will learn he’s dying from a brain tumor and he won’t live much longer. Once Bo dies, it sounds like Hope will discover that the DiMeras were tied to Bo’s kidnapping.

Since Bo was held in captivity, he didn’t have access to any tests or treatments that could’ve prolonged or even saved his life. Plus, the DiMeras robbed Hope of nearly three years that she could’ve been spending with her husband.

That will not sit well with this grieving widow. The ensuing war is sure to be epic. Could Stefano become a casualty of the never-ending feud between the Bradys and the DiMeras? Stick with DOOL for updates on who will savor sweet victory and who will taste bitter defeat.

So “Days” fans, what do you think about the news that Stefano will be killed off? Do you feel Andre will be a good replacement as the head of the DiMera family? Would you like for Stefano to make appearances as a ghost? Let us know what you think in the comments below and don’t forget to check CDL often for the latest “Days of Our Lives” spoilers, rumors, updates and news.