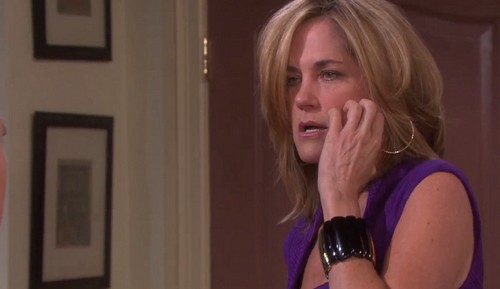 “Days of Our Lives” spoilers reveal that Kassie DePaiva is out as Eve Larson. Serial Scoop is reporting that DePaiva has already finished filming, but her scenes will continue to air in the coming months due to DOOL’s taping schedule. We don’t know for sure if this was DePaiva’s decision or not, but there’s a good chance she was fired due to the current overhaul of “Days.” The whole cast must be shaking in their boots. It appears no actor or actress is safe from the threat of casting cuts.

Now that we know Eve is leaving the NBC soap, we have to wonder how she’ll go. Eve’s ex, Eduardo (A Martinez), will arrive in Salem soon and he’ll certainly shake things up. DOOL rumors say Eduardo is Paige’s (True O’Brien) father and he’ll be on a mission to avenge her death. Eduardo will also spend some time visiting his other children, Rafe (Galen Gering) and Gabi (Camila Banus). It sounds like Eduardo will have a lot on his plate, but what does that mean for Eve?

It’s possible that Eve and Eduardo could begin to reconnect over the loss of their child. However, it seems likely that Eve and Eduardo will initially blame each other for making poor choices. Eduardo apparently wasn’t involved in Paige’s life at all and Eve contributed to her daughter’s demise by inadvertently pushing her away. Eve’s hookups with JJ (Casey Moss) didn’t exactly put Paige on the path to Stanford.

It’s been confirmed that the necktie killer will steer clear of Eve, which means she’ll exit “Days of Our Lives” by another route. It’s doubtful that the sting of losing her only daughter will ever really go away, but Eve might decide that she’d be better off trying to cope somewhere else. Perhaps Eve will move to California to be closer to Shane (Charles Shaughnessy) and Kim (Patsy Pease). After all, Theresa (Jen Lilley) and Justin (Wally Kurth) are pretty much the only people Eve has in Salem. Since Theresa will be busy with Basic Black and Justin is getting back together with Adrienne, Eve may have to find comfort elsewhere.

There’s also a possibility that Eve will be killed off. There are rumors floating around about a disaster storyline that’s coming up. It could even be something as simple as a car accident for all we know. Of course, there’s always the chance that Eve could never find a way to get over her grief. If Eve continues to sink into the pit of despair, could she try to take her own life? A suicide attempt doesn’t seem out of the question considering the character’s current state of mind. Even if the attempt fails, Eve might be convinced to seek treatment out of town.

Whatever the case, Eve is definitely done on “Days of Our Lives.” Who will be the next character on the chopping block? Stick with CDL for updates on even more upcoming departures.

So “Days” fans, what do you think about the news that Kassie DePaiva is out? Will you miss Eve? How should Eve exit the show? Let us know what you think in the comments below and don’t forget to check CDL often for the latest “Days of Our Lives” spoilers, rumors, updates and news.