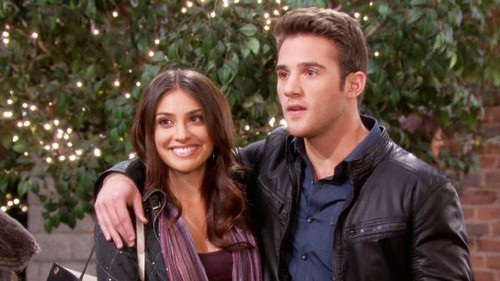 “Days of Our Lives” spoilers tease that March 2-6 will be another exciting week packed full of drama on the NBC soap, not that there is ever a dull day in Salem. Rumor has it DOOL fans will not want to miss a single episode, there will be some shocking revelations, explosive arguments, and a heart-felt goodbye. According to “Days Of Our Lives” spoilers, this is what DOOL fans can expect to see during the week of March 2.

Monday March 2: “Days of Our Lives” spoilers reveal that on Monday’s episode of the NBC soap Salem’s worst-kept secret finally comes to light and all hell breaks loose when JJ and Eve Donovan’s (Kassie DePaiva) hot and steamy affair is finally exposed. DOOL fans have been waiting for the truth about JJ sleeping with Paige’s (True O’Brien) mother to come out for months, and the fall-out from the big reveal is sure to be an exciting one.

Tuesday March 3: According to “Days of Our Lives” spoilers on Tuesday March 3 Nicole’s (Arianne Zuker) old flame Eric (Greg Vaughn) reaches out to her and makes a surprising admission to his former girl-friend. Meanwhile across town Paul Narita’s (Sean Christopher) mother Tori is thrown for a loop and begins panicking when she runs in to one of our favorite Salemites – and realizes he is someone from her past, perhaps Paul’s dad?

Wednesday March 4: On Wednesday’s episode of the NBC soap “Days of Our Lives” spoilers tease that DOOL fans can expect to see Hope (Kristian Alfonso) and Aiden’s relationship gets the “stamp of approval” from someone that they never expected. No news yet on who the mystery person is, but considering all of the drama that Hope and Aiden’s (Daniel Cosgrove) relationship has endured over the last few months – they could definitely use a supporter.

Thursday March 5: “Days of Our Lives” spoilers tease that on Thursday’s episode Melanie Jonas (Molly Burnett) will not be a happy camper when her boyfriend Brady (Eric Martsolf) jumps to his ex Theresa Donovan’s (Jenn Lilley) defense. Rumor has it that Brady and Theresa’s connection is far from over – and Melanie has every right to be concerned about his feelings toward Theresa.

Friday March 6: Friday’s episode of “Days of Our Lives” will find Ben’s sister Jordan making a life-changing decision. DOOL spoilers and coming and going news confirmed months ago that Jordan Ridgeway was leaving Salem and Chrishell Stause was exiting the NBC soap, so it’s safe to assume that her “life-changing” decision is to leave town.

So DOOL fans, who do you think Tori Narita runs in to in Salem that she knows from her past life? Do you think that Brady and Theresa will wind up hooking up again? Will you miss Jordan Ridgeway or are you happy to see the character go? Let us know what you think in the comments below and don’t forget to check CDL tomorrow for more “Days of Our Lives” spoilers and news.