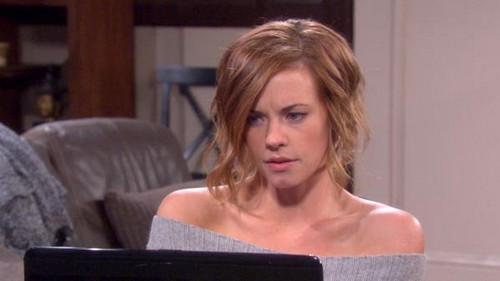 “Days of Our Lives” spoilers reveal that Melanie (Molly Burnett) is about to make Nicole (Arianne Zucker) an offer she won’t be able to refuse. DOOL fans know that Mel’s been curious about mysterious Dr. Mandrake (Sal Landi) and his link to Clint (Lucas Kerr). So far she hasn’t found much information on the shady physician, but that could change very soon.

“Days of Our Lives” spoilers hint that Melanie will ask for a little help in her search. Nicole’s background as a journalist could lead to a break in the case. What’s in it for her, you ask? In return for Nicole’s favor, Melanie will provide a favor of her own. A second chance with Daniel (Shawn Christian) could be at stake.

Rumors say that Melanie will have a conversation with her dad about cutting Nicole a bit of slack. Nicole’s assistance could give Melanie the info she’s been looking for, but will Melanie’s little talk really encourage Daniel to reconsider? He’s been pretty angry with Nicole, but his daughter’s words will likely carry some weight. Both Nicole and Melanie are awfully persistent and there’s a good chance they’ll end up getting what they want. Stay tuned to “Days” to watch them put their plan in action.

Melanie and Nicole will be teaming up to uncover the truth, but it may be Theresa (Jen Lilley) who finally gets to the bottom of things. “Days of Our Lives” spoilers indicate that Theresa will try to reach Clint, but she’ll make a surprising connection to someone else instead. She may end up getting in touch with Dr. Mandrake by mistake, which would put her one step closer to finding out about what Kristen (Eileen Davidson) did. Will Theresa remember that her embryo was stolen? DOOL viewers won’t want to miss a minute as the storyline shifts in preparation for Kristen’s dramatic return.

So “Days” fans, what do you think about Nicole and Melanie’s exchange of favors? Will they help each other out or is this a recipe for disaster? What about Theresa’s intriguing, new connection? Will her fuzzy memories finally become clear? What will Kristen do once the truth comes out? Let us know what you think in the comments below and don’t forget to check CDL tomorrow for the latest “Days of Our Lives” spoilers and news.