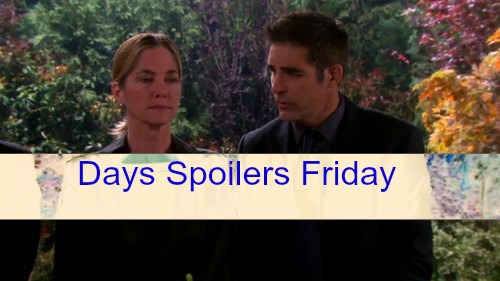 “Days of Our Lives” spoilers for Friday, October 2, tease that it’ll be a tough day for Eve (Kassie DePaiva). All the preparations have been made for Paige’s (True O’Brien) funeral and it’s time for the service to get underway. Eve will try her best to get through it, but she’s in a lot of pain.

Rafe (Galen Gering) will let Eve know that he intends on getting justice. Though Eve wants to catch the killer and put him away, it’s doubtful that will really make much of a difference in her current outlook. Now that Paige is gone, Eve feels like she’s all alone.

Of course, Eve still has Theresa (Jen Lilley) in her life. Theresa knows Eve is trying to come to grips with Paige’s death and she’s finding it hard to watch her sister suffer. Luckily, it looks like Theresa will get a little support from a friend. DOOL spoilers say Brady (Eric Martsolf) will have some kind words for Theresa as she deals with her grief. It’s nice to see this pair on better terms. Theresa has grown up quite a bit over the last few weeks and Brady is starting to notice.

Unfortunately, Theresa tends to take one step forward and two steps back. After Brady told her he had faith in her at Basic Black, Theresa misread the situation and leaned in for a kiss. Needless to say, Brady was not pleased. In spite of the stumbling block, “Days” rumors hint that the future is bright for “Thrady.” If Theresa can learn to take things slow, there’s a good chance friendship could bloom into love. Stick with “Days of Our Lives” to find out if this is a budding romance.

Meanwhile, Eduardo (A Martinez) will decide he’s tired of waiting on the Salem PD to get their act together. Eddie wants revenge and he wants it now. DOOL spoilers suggest that Eduardo will do something drastic in an effort to make sure Chad (Billy Flynn) is apprehended.

It’s not clear what Eduardo has in mind, but we do know it will basically mean there’s a bounty out for Chad’s head. When Rafe discovers Eduardo is taking matters into his own hands, he’ll certainly give him an earful. Stay tuned to “Days of Our Lives” to see their confrontation next week.

So “Days” fans, what do you think about the news that Eve will have a difficult time getting through Paige’s funeral? Will Brady make some updates to how he views Theresa? Will Eduardo’s efforts succeed or will Chad continue to fly under the radar? Let us know what you think in the comments below and don’t forget to check CDL often for the latest “Days of Our Lives” spoilers, rumors, updates and news.