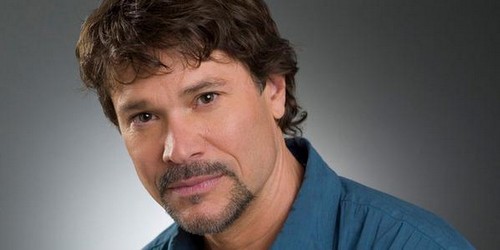 “Days of Our Lives” spoilers tease that Bo (Peter Reckell) will soon make his way back to Salem. Many DOOL viewers are getting excited about watching Bo reunite with his true love, Hope (Kristian Alfonso). Likewise, it’ll be nice to see Peter Reckell return to daytime television. It’s a beloved actor in a beloved role. That’s just the kind of addition “Days” is looking for as it heads into its 50th anniversary. In an interview with Yahoo TV, Reckell opened up about coming home and what “Days of Our Lives” fans can expect this fall.

First, there’s the obvious question: why did Reckell agree to return? Reckell stated that he’s been busy with his family lately, but helping with the show’s anniversary celebration proved to be a huge draw. It seems Reckell truly connected with the new head writers’ (Dena Higley and Josh Griffith) vision for the NBC soap. Reckell said he knew “they had history with the show, that they were trying to do something for the 50th anniversary that would tell people that, hey, Salem’s back. The ‘Days of Our Lives’ that you fell in love with is back.”

Most viewers would agree that DOOL has really stepped up its game since the new head writers took over. It appears everyone on set is thrilled with the positive changes as well. Reckell noted that “it’s just so powerful because of the history that we all have together. You’re going to witness some amazing moments of daytime TV that I haven’t experienced in my 30 years.”

Of course, we can’t forget about Bo’s better half, Hope. It’s clear that many “Bope” fans weren’t happy about how things ended last time around. This supercouple deserved a fantastic sendoff. Instead, their romance sort of fizzled. “When Bo was written off before, it was so awkward,” Reckell admitted. Fortunately, the current writers have provided a good explanation for Bo’s return. Reckell gushed, “I can’t say enough how proud I am for the way they handled the writing of this.”

Bo will also have the opportunity to bond with his daughter, Ciara (Vivian Jovanni). The dynamic will undoubtedly be different since Bo has been gone so long. Thanks to SORAS, Ciara will add a little teen drama to an already difficult situation. Still, they’ll probably manage to talk through their troubles. Reckell said, “I think the audience is really going to connect to their relationship, because we did get to spend a lot of time together, the two characters. She’ll be kind of carrying the mantle of Bo onward.”

Uh-oh. They DID spend time together? It sure sounds like Reckell has wrapped up his stint. The rumors suggest that Bo will die heroically, but most of us will take as much of him as we can get until then. Reckell hinted that we’ll see a return of Bo on a motorcycle and we’ll certainly hear him use Hope’s classic nickname, “Fancy Face.” Bo and Hope are soulmates and they always will be, even if Bo meets an untimely death. “It’s a powerful love history,” said Reckell. Stick with “Days of Our Lives” for updates on the drama that lies ahead.

So “Days” fans, what do you think about the news that Bo will head back to Salem? Are you excited for a reunion between Bo and Hope? Do you like the changes you’re seeing at DOOL so far? Let us know what you think in the comments below and don’t forget to check CDL often for the latest “Days of Our Lives” spoilers, rumors, updates and news.