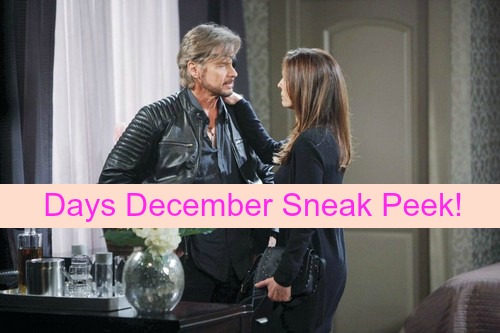 “Days of Our Lives” spoilers reveal that December will bring some big gifts for DOOL fans. Viewers won’t want to miss all the drama the NBC soap has in store. Hope (Kristian Alfonso) will begin the next phase of her revenge mission. Bo’s (Peter Reckell) death might’ve been prevented if his captors hadn’t held him for so long. Unfortunately, the tumor had grown too large to be treated and now Hope is determined to get justice.

Despite Steve’s (Stephen Nichols) worries, Hope will head straight into danger. You can expect a tense meeting when Hope tracks down the evil doctor who drugged Bo. Dr. Malcolm (Adam Leadbeater) will find himself held at gunpoint as Hope demands answers.

Meanwhile, Shawn (Jason Cook) will bid Belle (Martha Madison) farewell. That means “Days” fans will have also have to say goodbye to Shawn—at least for now. Soap Opera Digest is reporting that Jason Cook’s last airdate will be December 2. Luckily, Shawn will be back soon, but he’ll be sporting a new look. “Days of Our Lives” spoilers indicate that Brandon Beemer will take over the role on January 19.

Until then, Belle will have to deal with another ex. John-Paul Lavoisier will debut in December as a recast of Philip Kiriakis. Old feelings could come rushing back since Belle is single again. We’ll also see the return of Ava Vitali (Tamara Braun) as the month kicks off. This classic villainess will stir up major trouble for Steve and Kayla (Mary Beth Evans).

Finally, DOOL spoilers tease that Abigail’s (Kate Mansi) baby will be named. Things have been chaotic at the cabin and Abby hasn’t had a chance to choose a moniker for her son. Ben (Robert Scott Wilson) will try to kidnap the child, which suggests that it could be a while before we know what to call him.

Nevertheless, the fact that the baby will get a name in December is probably good news. It sounds like Abigail might get her son back in time for the Christmas festivities. Stick with “Days of Our Lives” for updates on the potential family reunion.

So “Days” fans, what do you think about all the intriguing storylines ahead? Are you excited about the upcoming returns? Will the holidays bring any happiness to Salem? Voice your opinion in the comments below and don’t forget to check CDL often for the latest “Days of Our Lives” spoilers, updates and news.