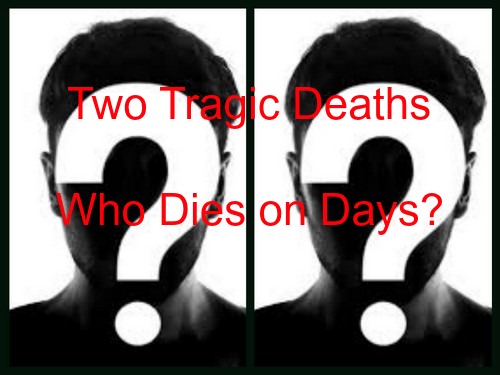 “Days of Our Lives” (DOOL) spoilers reveal that major drama is coming up in early 2016. There are many exciting and tragic storylines in the works. We’ve got a sneak peek of what you can expect as the new year kicks off.

First, it looks like we’ll see another shocking death—or maybe not so shocking if you’ve been keeping up with DOOL spoilers. Daniel (Shawn Christian) will be the unlucky victim of car crash involving several Days’ characters.

Daniel’s last airdate is January 6 when Nicole (Arianna Zucker) says her final goodbye. Melanie (Molly Burnett) and Chloe (Nadia Bjorlin) will return to “Days” soon, which means Dr. Dan will be yesterday’s news before you know it.

Speaking of changes, we’ll see plenty of those for Steve (Stephen Nichols) and Kayla (Mary Beth Evans). Ava (Tamara Braun) will continue to sell her sob story and wrap the Johnson family around her little finger. Joey (James Lastovic) could find himself in over his head.

To make matters worse, Ava will give Steve updates on something that sends him away from Kayla once again. While Steve is off sorting things out, Kayla will end up in serious peril.

Other “Days of Our Lives” spoilers tease that Rafe (Galen Gering) will try to get Hope’s (Kristian Alfonso) life back on track. As Rafe and Hope grow closer, their friendship could become something more.

Of course, Hope will still have revenge on her mind. Bo’s (Peter Reckell) captors need to be brought to justice and Hope won’t rest until that happens. Unfortunately, DOOL spoilers say Andre (Thaao Penghlis) will have a plot brewing that could catch Hope off guard.

Meanwhile, Chad (Billy Flynn) will have some surprises of his own in store. When brainwashed Chad comes back to reality, he’ll ask Abigail (Kate Mansi) to marry him. After Chad’s proposal, they’ll work on a scheme to knock the DiMeras off their throne. Stick with “Days of Our Lives” to see if Chad’s idea will pan out.

Of course the most upsetting spoilers for 2016 is that there will be a cold-blooded murder of a major character – this was leaked by Ken Corday, executive producer of “Days.” To the best of CDL’s knowledge the victim will be Stefano DiMera who will remain on contract and appear as a ghost after his death.

So “Days” fans, what do you think about these teasers for early 2016? Which storylines are you looking forward to in the new year? Voice your opinion in the comments below and don’t forget to check CDL often for the latest “Days of Our Lives” spoilers, updates and news.