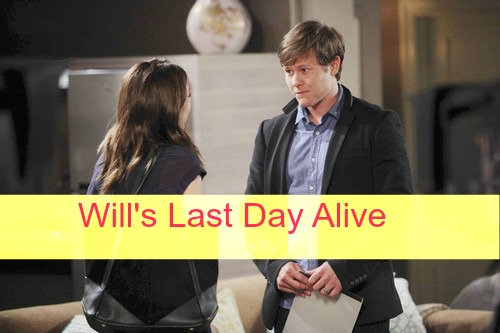 “Days of Our Lives” spoilers for Thursday, October 8, tease that Chad (Billy Flynn) and Abigail (Kate Mansi) will share a tense moment. Abigail has been feeling stressed lately and that likely played a role in the recent pain she experienced. Though Abigail wants to clear Chad’s name, she has to consider the baby.

Perhaps Abigail will try to back off and let the DiMeras handle it. Stefano (Joseph Mascolo) definitely wants to help Chad beat the charges and Andre (Thaao Penghlis) just wants to fulfill his father’s wishes. With Andre and Stefano on his side, Chad might be able to prove his innocence down the road.

Unfortunately, things are going to get worse before they get better. DOOL spoilers reveal that the necktie serial killer will soon strike again, which means another murder will be pinned on Chad. Will (Guy Wilson) is about to find a clue that may lead him to a startling conclusion.

We don’t know what evidence will be found, but it’ll be an unlucky discovery for Will. Ben (Robert Scott Wilson) will realize that Will could point to him as the killer and he’ll have to take action. Keep watching “Days of Our Lives” to see Will become the third murder victim.

Meanwhile, Aiden (Daniel Cosgrove) will make a move of his own. “Days” spoilers say Aiden will hear about Clyde’s (James Read) recent arrest and decide he can help the police make their case. Aiden will do a little digging and find confirmation on some of Clyde’s dirty deeds. Roman (Josh Taylor) needs all the proof he can get to make the charges stick. Aiden will be thrilled to have a chance to get vengeance, but this is still a risky decision.

When Roman spills the details to Hope (Kristian Alfonso), she’ll have even more doubts about her fiancé. Hope just got filled in on Aiden’s gambling debts and now she’ll learn he lied about Clyde’s attack. Naturally, Hope will start to wonder what else Aiden could be hiding. DOOL rumors hint that Aiden has plenty of secrets just waiting to be uncovered. Stay tuned to “Days of Our Lives” to see if Hope will find out Aiden isn’t the man she thought he was.

So “Days” fans, what do you think about the news that Stefano and Andre will increase their efforts to help Chad? Will Ben’s next murder force them to make updates to their plans? Will Aiden dig an even bigger hole for himself by seeking revenge on Clyde? Let us know what you think in the comments below and don’t forget to check CDL often for the latest “Days of Our Lives” spoilers, rumors, updates and news.