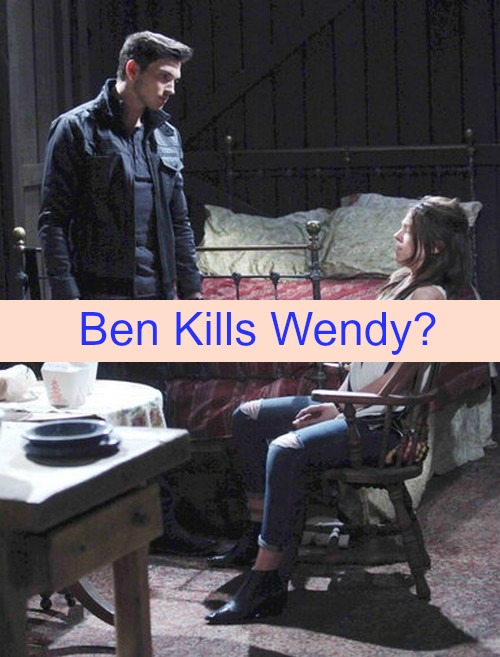 “Days of Our Lives” (DOOL) spoilers reveal that Abigail (Kate Mansi) will prepare for the birth of her baby. Ben (Robert Scott Wilson) is refusing to let Abigail go to the hospital and his decision is final. Like it or not, Wendy (Denice Duff) will have to deliver this child at their secluded hideaway.

DOOL’s weekly promo shows Abigail struggling through a tough labor as Ben waves his gun around and tells them how it’s going to be. Ben has really gone off the deep end and he’s past the point of no return.

Once Abigail has the baby, one can only guess what will happen to poor Wendy. Abigail told Wendy their names and she would likely go to the police if Ben let her out of this alive. Will Ben be forced to take another victim?

Things don’t look good. Ben tends to make bold moves when he’s backed into a corner. Wendy could pay the price for being in the wrong place at the wrong time. Who knew being a midwife in the middle of nowhere could be so dangerous?

DOOL viewers will hold out hope that Wendy can make an escape, but Ben will surely try to keep an eye on this stranger who knows too much. Meanwhile, something will suddenly click into place for Chad (Billy Flynn). Thanks to Marlena’s (Deidre Hall) hypnosis, Chad is having scattered memories and a new one will soon emerge.

“Days of Our Lives” spoilers say Chad will remember that Ben is the true serial killer. After that shocking realization, Chad will immediately find Rafe (Galen Gering) and once again beg for his help. This time Rafe may be a little more willing to cooperate. Rafe was suspicious of Ben’s story after he beat Chad into a coma. It looks like Rafe will finally buy the idea that Abigail could be in harm’s way.

Rafe and Chad will figure out that Abigail is on Smith Island by tracking her cell phone. Unfortunately, the signal will be weak and there’ll be a lot of ground to cover. Nevertheless, Chad will be determined to find his love before it’s too late.

The promo released during Day of “Days” tells us that Ben will go full-on crazy when Chad tries to help Abigail. It appears Ben will chain them up, light the bed on fire and make a break for it with the baby. The rumors hint that Chad and Abigail will survive the blaze, but they’ll still have to worry about the child’s safety. Stick with “Days of Our Lives” for updates on the peril to come.

So “Days” fans, what do you think about the news that Ben will force Abigail to have the baby at the shack? Will this ogre get what’s coming to him? What will happen to Wendy? How will Chad and Abigail manage to flee the flames? Let us know what you think in the comments below and don’t forget to check CDL often for the latest “Days of Our Lives” spoilers, rumors, updates and news.