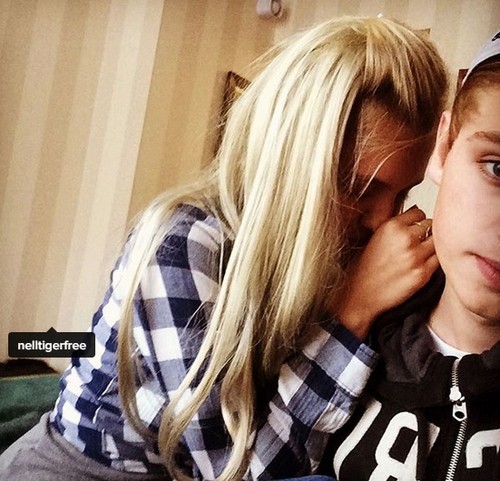 Which two Game Of Thrones actors are dating in real life? The set of HBO’s hit drama appears to be the location of a real life romance – and according to a new report, Dean-Charles Chapman and Nell Tiger Free are officially dating. 17 year old Dean-Charles and 15 year old Nell have been PDA-ing all over social media, and sharing a ton of selfies with each other: travelling together, cuddling together, attending music festivals together, and even going on camping trips together.

For those of you who aren’t familiar with Game Of Thrones (and you should be by now), Dean-Charles Chapman plays the part of Tommen. And, Nell portrays the character Myrcella Baratheon – ironically Tommen and Myrcella are actually the children of GOT’s twin characters Jaime and Cersei on the HBO drama. But, no worries the two teenage cast members are not related in real life.

Now, one could argue that Nell and Dean-Chapman are just hanging out and having some fun while they are shooting together – but that argument is pretty invalid considering the fact that Myrcella was just killed off the show. Nell is not currently filming Game Of Thrones at this time, so any time that she and Dean-Chapman are spending together is strictly in their free time and not a matter of convenience because they work together.

Nell Tiger Free and Dean-Chapman make probably the cutest couple ever, however we’re not going to get too invested in their relationship seeing as how they are super young. Still, you never know they could be in it for the long haul. That is, as long as Dean-Chapman doesn’t fall for any other maidens in the Seven Kindgoms while he is filming on set without his girlfriend. What do you think about the adorable new couple? Let us know in the comments below!