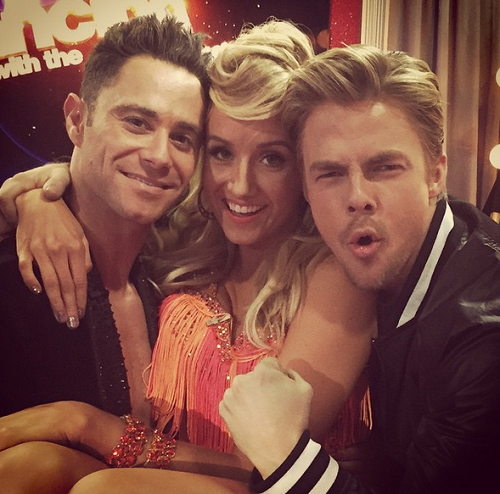 Dancing With The Stars pro dancer Derek Hough is out of commission after an injury at rehearsal that left him with broken toes and a sprained ankle. According to the May 11 edition of GLOBE Magazine, Derek’s injuries could have been completely avoided if he wasn’t being greedy. Now, because of Derek’s mishaps, the dancer is now on crutches, isn’t making any money on DWTS, and has left his partner Nastia Liukin high and dry – forcing her to perform with replacement dancer Sasha Farber.

The recent edition of GLOBE Magazine reveals, “The Dancing With The Stars regular decided to take a break from Season 20 of the hit ABC show to perform the male lead in Radio City Music Hall’s Spring Spectacular, then changed his mind and opted to do BOTH gigs. His two-fisted cash grab backfired when he injured both feet while rehearsing for a DWTS special. Now, he can’t perform at all!”

So, would Derek Hough have still gotten injured if he wasn’t working two jobs at once? Hough has maintained that it was a total freak accident – he stubbed his toe on a prop backstage and then sprained his ankle while he was getting ice for his toe. That definitely could have happened if Hough was only working one job. But, if he was working only one gig – he wouldn’t have been exhausted or clumsy, and there is a good chance that he wouldn’t be walking in to things.

At the end of the day, there really is no way to tell if Derek’s injury would have been avoided if he were devoting all of his time to Dancing With The Stars instead of trying to juggle the ABC show and Radio City Music Hall. At this point, we just feel sorry for his partner Nastia Liukin who was an obvious front-runner for the Season 20 Mirror Ball Trophy until Derek’s mishap. Do you think that if Derek was less greedy his injury would have been avoided? Or was it a fluke accident that would have happened regardless of how many jobs he was juggling? Let us know what you think in the comments below!