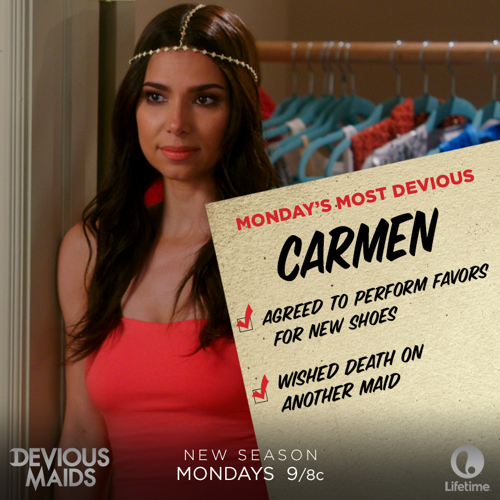 Tonight on Lifetime DEVIOUS MAIDS continues with an all new Monday June 29, season 3 episode 5 called, “The Talk of the Town” and we have your weekly recap below. On tonight’s episode Zoila [Judy Reyes] discovers a secret from Genevieve’s [Susan Lucci] past; Rosie [Dania Ramirez] struggles with having both Ernesto and Spence [Grant Show] in her life.

On the last episode, Rosie adjusts to having Ernesto back in her life; Genevieve made a heartfelt offer to Zoila; Jesse made an unexpected discovery and seeks out Marisol to help; Carmen found a clever way to make Sebastien jealous; Michael became suspicious of Taylor. Did you watch the last episode? If you missed it we have a full and detailed recap right here for you.

On tonight’s episodes per the Lifetime synopsis, “Zoila discovers a secret from Genevieve’s past; Rosie struggles with having both Ernesto and Spence in her life; Marisol tries to fight her attraction to Jesse; Carmen is outsmarted by Adrian; Taylor reaches her breaking point.”

Tonight’s episode is going to be another fun one, which you won’t want to miss. So be sure to tune in for our live coverage of Lifetime’s Devious Maids Season 3 episode 5— tonight at 10PM EST! While you wait for the episode, share your comments about season 3 of Devious Maids below.

Tonight’s episode of Devious Maids kicks off with Genevieve being questioned by the police about Louie Becker’s murder. Zoila is shocked when she hears that Genevieve was having an affair with Louie – she can’t believe that she was sleeping with her tennis coach. Genevieve insists that they were just sleeping together for a few months and it wasn’t that serious. She tells the police that they should go question Evelyn Powell because she was always flirting with Louie. Genevieve’s lawyer Michael Stafford advises Genevieve not to say anything else, but Genevieve rants that she thinks Louie is a slime ball and she isn’t upset that he is dead.

Marisol heads downstairs in her pajamas and is shocked to see that Jesse is already at her house and doing her laundry. She freaks out because he is carrying a basket of her panties and she doesn’t have any make up on. Marisol takes her panties from him and says that she can take care of them herself. After their awkward run-in, Marisol asks Jesse to clean the vents, and tells him he doesn’t need to handwash her bras for her.

Rosie and Spence are helping Ernesto move in to his new place, Spence is letting him borrow some furniture. Miguel drops a box and swears – Ernesto tells him that swearing is a sin. Ernesto and Spence get in to an argument over which one of them is Miguel’s father. Ernesto announces that he is taking Miguel and Rosie to church on Sunday. Spence complains that he always takes Miguel to the park on Sunday – it’s “kind of their thing.”

At home Michael tells his wife Taylor about Louie’s case. Taylor says that the night that Louis was murdered was “quiet,” and she went to bed early with Katie. Michael can tell something is off, he reminds her that was the same night that Blanca moved in to their house. Taylor rants that she doesn’t want to talk about Blanca, she “wasn’t a good fit.”

Zoila corners Genevieve and wants to know what happened between her and Louie. Genevieve confesses that she made a sex tape with Louie, and on the video they “tried something different,” called the blooming orchid. Louie showed the video to his friends at the club, Genevieve was furious when she found out that he shared the video. Genevieve makes Zoila swear not to tell anyone because she just started dating Christopher, and she doesn’t want him to know about the blooming orchid. She warns Zoila that she has to take the secret to her grave.

Rosie tops by Ernesto’s new apartment to talk about Sunday and he greets her in a towel. Rosie freezes and can’t even remember why she came, she asks him to go put some clothes on. Rosie stutters that Miguel has to go to the park on Sunday with Spence, Ernesto agrees to take him to church on Saturday night.

Evelyn heads to the police station to be questioned about Louie’s murder, Evelyn is appalled when the detective asks her if she was flirting with Louie. She realizes that it was Genevieve that said she was flirting with Louis and she shouts to the detective that she is going to “murder that skinny little hag.” Meanwhile, Zoila calls Carmen and tells her about Genevieve’s blooming orchid. Carmen promises not to tell, but then she blabs the news about Genevieve’s sex tape to Evelyn so that she doesn’t fire her.

[8:08:47 PM] Amanda Austin: Rosie wakes up in the middle of the night after having a hot sex dream about her ex Ernesto. Later Marisol, Carmen, Rosie, and Zoila head out to lunch. Marisol tells them about her maid Jesse, she is embarrassed because Jesse overheard her gossiping about hot he was. Rosie thinks that Marisol should ask him out, even though he is her maid – after all she was Spence’s aid and she wound up marrying him.

Evelyn heads to the tennis club, she is snooping around and asking questions about Louie Becker. She wants to know if Louie’s friends know where the blooming orchid sex tape is starring Genevieve. Adrian meets with their real estate agent Sebastian while Evelyn is gone, he tells him that he wants their new house to have some sort of dungeon or secret room in it. While they are talking, Adrian puts two and two together and realizes that Sebastian is the married man that Carmen has been seeing. Michael Stafford shows up at Marisol’s house and is trying to find Blanca, Marisol gives him Blanca’s sister’s number in Arizona.

Evelyn get Genevieve’s blooming orchid video, and she text it to every single person’s phone number on the contact list of the tennis club. Genevieve is horrified when Christopher sees the sex tape and her blooming orchid, she demands to know how Evelyn found out she ratted her out to the police, Evelyn reveals that Zoila has a big mouth.
Rosie heads to confessional to confess that she had sex dreams about Ernesto. The pastor reveals that since Rosie’s husband isn’t dead, she is still technically married to Ernesto. She is actually sinning by sleeping with Spence, and he isn’t really her husband.

Michael Stafford storms in to his house, he got off the phone with Blanca’s sister and she is missing. He looked at her bank account and knows that Taylor was paying her to keep her quiet. Michael confesses that he sent Louie to their house the night he was murdered to spy on Taylor because he knew she was having an affair. He accuses Taylor of killing Louie and Blanca – she insists she is innocent.

Genevieve heads home furious, she and Zoila wind up in a huge screaming match over Zoila telling her secret and ruining her life. Genevieve says that she cant stand to be in the same house as Zoila, she storms out and announces she is going to Greece with Christopher.

Katie heads her mom on the phone crying and yelling. She demands to know what the person on the other end of the line did with Blanca. Katie asks her if everything is okay, and Taylor tries to reassure her that it is all fine. When she isn’t looking, Katie drops a dozen pills in to her mom’s wine glass.

Carmen tries to tell Adrian that she is done whipping him and punishing him. Adrian has other plans, he bought a machine so that Carmen can give him electric shocks. Carmen refuses, but Adrian tells her that if she doesn’t “punish” him then he is going to tell Sebastian’s wife that he is cheating on her with a maid.

At Spence and Rosie’s house, they head to bed. Spence puts on his good underwear and tries to have sex with her. Rosie says that she is too sick and feels a tickle in her throat, she decides to sleep on the couch.

Marisol shows up at Taylor’s house, Katie answers the door and says that her mom wont wake up. Marisol rushes in and finds Taylor passed out on the couch – she calls 911.