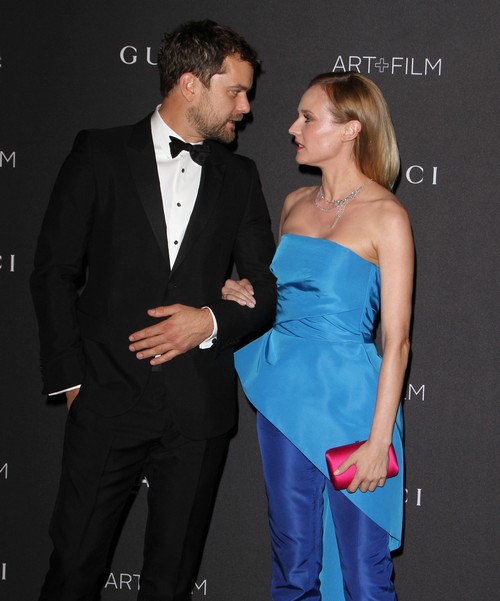 Did Diane Kruger reunite with Joshua Jackson after a brief split? Is Norman Reedus heartbroken after a one-night fling with the model-actress? Reedus and Kruger were recently seen out on the town together at a bar in New York City.

Star recently published a report that the duo stopped into the 12th Street Alehouse in the East Village. Diane and “The Walking Dead” actor grabbed a couple of drinks and sat down at a table.

Bar patrons revealed that it wasn’t long before Diane popped out of her chair and straddled Norman. An eyewitness claims Kruger and Reedus were “all over each other but Diane as definitely the aggressor. Another observer at the watering hole claims that the pair were “making out on top of each other.”

Joshua has been out of town on a solo trip. Some reports say “The Affair” star was gone for 21 days, but the actor could have been gone for as long as six weeks. The alleged public make-out session between Kruger and Reedus caused speculation that Joshua and Diane may be on a break. Or, that the long-time couple had decided to permanently separate.

Those close to Joshua Jackson told Star that there is no way Jackson and Kruger have split – or are on the verge of splitting. Joshua and Diane are one of the closest couples in Hollywood and have been together nine years. Star reports that Joshua’s dad, Carter Jackson, laughed off the rumors that Diane was cheating on his son. “She was having a good time in the Village. [Josh] would probably have a chuckle.”

But is that the way Norman interpreted the alleged hot and heavy kiss fest? Reedus and Kruger worked together on the movie “Sky” – not yet released in the United States – and set insiders report that sparks flew between Norman and Diane from day one. “They certainly had chemistry,” one source reported.

There are those that say Norman split from model-girlfriend Cecilia Singley in February and started dating an “older actress.” Singley is 22, Reedus is 46, Kruger is 39. If Norman dumped Cecilia for an “older woman” then Diane would fit that description. Is Norman pining away for Diane? Is Reedus heartbroken that Diane won’t dump Joshua?

Star contacted representatives for both Diane Kruger and Norman Reedus and there were “no comments” from both sides. There is speculation that Diane used the PDA-packed outing with Norman to reignite her career. While Norman’s popularity is “sky high” right now, Diane hasn’t been in a hit movie since “Inglorious Basterds” in 2009, and hasn’t done much since the FX series “The Bridge was cancelled in 2014.

While Joshua Jackson has a relaxed attitude toward acting, Diane Kruger is ambitious, wants to be a leading lady and win awards. A friend revealed that Kruger’s “dive-bar love scene” with Norman Reedus was pure performance.

If that’s the case, those close to Jackson divulge that the actor will overlook any mild “indiscretion” on Diane’s part. Someone might want to let Norman know that the bussing in the bar was probably an audition of sorts for Diane.