Donald Trump Running For President: The Apprentice Star Announces Bid For US Presidency 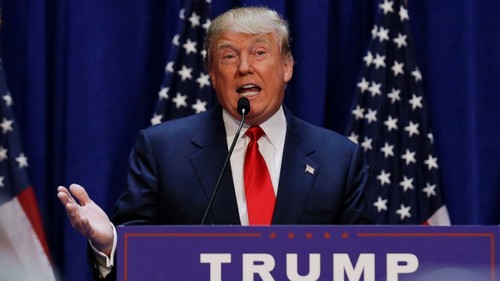 Is Donald Trump running for President of the United States? Yes – while some may wish it was just another Internet hoax, the Celebrity Apprentice star announced his US Presidential bid on Tuesday June 15. Trump announced his bid as a Republican from his New York City Trump Tower, and gave an official speech – which of course was riddled with references about how wealthy he is, and he threw some shade at Mitt Romney.

In Donald Trump’s Presidential bid speech the millionaire stated, “We need somebody that literally will take this country and make it great again — we can do that. So ladies and gentlemen, I am officially running for President of The United States.” The always humble Trump went on to remind the crowd that he owns a Gucci store that is worth more than Mitt Romney’s entire campaign, and even went on to say that he was the “most successful man” to ever run for President in the US.  Well please note that Trump has been through 4 corporate bankruptcies so the term ‘successful’ is somewhat qualified here.

Donald Trump rose to notoriety for his wealthy business ventures and real estate holdings, The Apprentice star is reportedly worth a whopping $9 Billion. And, Trump plans to use his wealth and success as a cornerstone for his campaign – because you know if you can run a successful hotel chain, then running an entire country will be a walk in the park for you.

The billionaire blowhard has already invested a lot of time and money in to his bid for Presidency, and in March he actually launched a committee to feel out the waters and see if he stood a chance at being elected. Apparently the committee seems to think that Donald Trump stands a chance of becoming the next President of the United States. Trump’s campaign slogan will be “Make America Great Again.”

So, what do you think of Donald Trump’s bid for Presidency? Will you be voting for the business tycoon? Let us know what you think in the comments below!