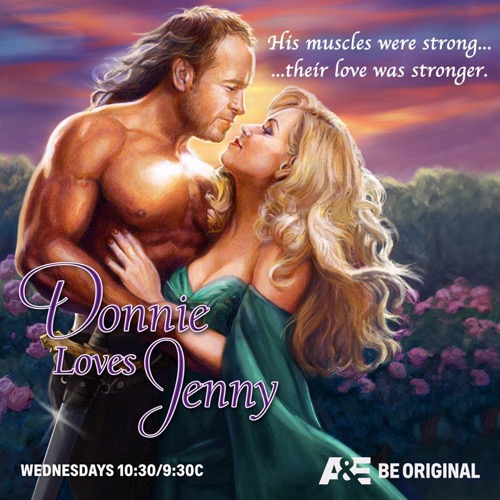 Donnie Loves Jenny airs tonight on A&E with an all new Wednesday January 28, season 1 episode 4 called “All About the Bass” and we have your weekly recap below. On tonight’s episode, Jenny wants Donnie to take care of himself.

On the last episode, Donnie and Jenny offered to assist when Jenny’s single father, Macky, landed his first date in ages. Did you watch the last episode? If you missed it, we have a full and detailed recap right here for you.

On tonight’s episode as per the A&E synopsis, “Jenny pushes Donnie to take better care of his health after Macky gets a medical scare.”

Jenny is doing her Sirius radio show and she’s wearing a pink fuzzy mustache. Her co-host Janine is wearing a purple one and her dad Macky is there. They’re talking about prostate exams. Donnie says growing up in his house, they couldn’t afford the doctor so by the time they could go, it was too late. Jenny says it’s just a finger in the butt. Macky says that’s not sexy at all.

Jenny takes her dad to Dr Kaufman’s office for his prostate check. She asks if he’s sexually active and he says yes. She asks about radiation from his prostate cancer treatment and she says his balls are probably glowing. His numbers are back up, so that’s why they’re there. Jenny says she can’t imagine her life without her dad. Jenny says her husband is 45 with a family history of prostate cancer.

He says he should be getting checked. Jenny and Evan are eating Oreos when Donnie comes in. He asks about her dad’s doctor appointment. She asks Evan to go upstairs for a minute. She says her dad’s numbers are way up and it’s scary. She then tells Donnie that with his family history he needs to start getting checked. Donnie says Wahlburgs are born in the hospital then don’t come back until they’re ready to die.

Back on her show, Jenny has Donnie co-hosting with her. He says he was kicked off the Blue Bloods set for two hours. Macky is also there – he comes to work with her every day. She asks if he’s learned a lot. He says he’s learned everything about her and has read all her dirty fan mail. She says she learned all about his prostate. She says you need to get your men into the doctor’s office.

She says she was glad that Donnie listened to her. When they take a commercial break, Donnie tells her he didn’t go to the doctor. He says he will go and she says she doesn’t believe him. He says he thought she would get over it and wasn’t serious. He says it was a fun show then their shared calendar syncs and he sees that she made him an appointment. He says she doesn’t even know his schedule.

She says it’s not about his schedule it’s about him not wanting his butt touched. She says he promised her once already. He says he will once he feels ready to do it. Jenny and her sister Jojo are looking for herbs for their dad. They talk about how old people still write things down on paper instead of texting. The sisters argue over who will go ask for the poop medicine but then they find it.

Jenny tells her Donnie won’t go to the doctor. They argue over who will buy their dad’s poop medicine and Jenny sets it down in front of the clerk and says that Jojo is really constipated then runs out to leave her sister to pay. Danny, Rob and Johnny are giving Donnie a hard time about getting his lip busted on set and tell him that it looks like herpes.

Donnie talks about his schedule and Danny says that Donnie has a doctor’s appointment that he has to go to. Johnny says he had to have a colonoscopy and Donnie says he’s not having a camera up his ass. Rob tells him he should do it and just suck it up. Donnie is annoyed they are not taking his side on this. Jenny and Jojo pull out a bottle and agree that it’s wine o’clock. She says she wants Jojo to help her figure out how to get Donnie to go to the doctor.

Jojo says motivating men is different and says maybe they need to be like prostate cheerleaders and get him pumped up like before football games. Donnie says Danny has been his friend for like 40 years. Once they’re alone, Danny says that he should go to the appointment because Jenny loves him and reminds him that he lost his mom to breast cancer.

He says if she had a mammogram done earlier, she might still be with them. They hug it out. Donnie says damn it. He finds Jenny waiting at Dr Kaufman’s. She asks why he’s there. He says he’s there to check on her and Macky and to tell her that he changed his mind and is going to go to the doctor. He says he talked to the guys.

She asks if the guys changed his mind and he says it was just reminding him what he needed to think about. He says he’s not used to letting people do things for him and he’s not letting his wife take care of him. Jenny says she wants to grow old with him and wants them both to be healthy enough to enjoy it. Macky comes out smiling and she’s relieved to hear that he’s all right.

Donnie gets his exam and Macky says he’s walking funny. Donnie wants to know if Jenny has a prostate that needs to get examined and she says she gets pap smears and that’s enough. They all leave. Macky asks Donnie if he had both hands on his shoulders when he checked him and Donnie laughs. Jenny holds up her finger and asks Donnie if he’s too tired to go again. He laughs.