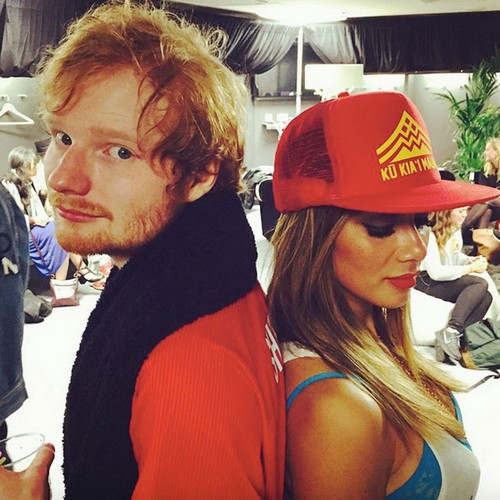 Ed Sheeran has a new girlfriend, and they might make the most random couple ever. Ed Sheeran is reportedly dating former Pussycat Doll Nicole Scherzinger. The two singers met through the Hollywood music scene, and despite the fact that Nicole is 37 and Ed is just 24 – they apparently hit it off instantly. And, they haven’t exactly been trying to hide their romance wither.

Last month Nicole Scherzinger shared a photo on social media of herself posing with Ed Sheeran, and captioned it with a cute comment about how he was taller than her. On July 27 Nicole took the stage in Hollywood for a performance of her hit song “Don’t Cha” and before she began singing on stage she dedicated the song to Sheeran. Scherzinger purred in to the microphone, “This is for you Ed.”

Seriously, how did we all not notice that Nicole Scherzinger and Ed Sheeran were hooking up? According to a new report from The Sun, Ed hasn’t even been bashful about their budding new romance – and he has been gabbing to all of his close pals and him and Nicole. A source close to the couple dished to The Sun, “They were showbiz friends who saw each other on the scene. She was drawn to him over the last few months through his music. When she split from Lewis, she was heartbroken but ended up playing Ed’s songs on a loop. They’re extremely close. Nicole says he is the male version of her.”

We are still trying to wrap our minds around Ed Sheeran and a Pussycat Doll – it seems totally random, but also pretty adorable. Ed has always had a kind of awkward and goofy persona, yet he somehow managed to pull one of the sexiest singers in Hollywood, who is 13 years older than him! We might have seriously under-estimated Sheeran. What do you guys think, do Ed and Nicole make a cute couple? Do you think it will last? Share your thoughts in the comments below!