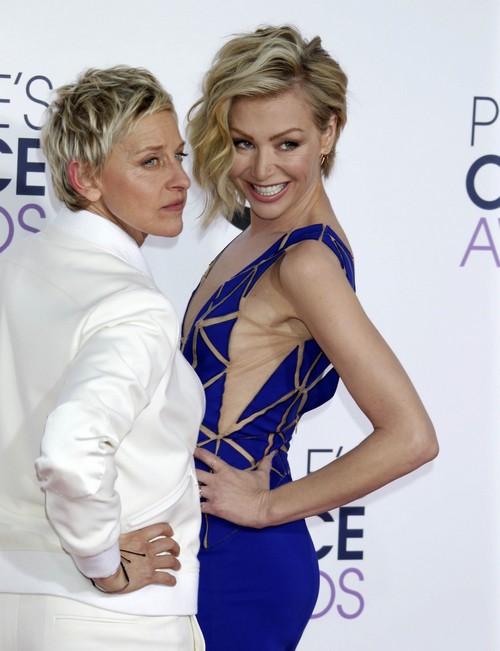 Ellen DeGeneres and Portia de Rossi’s divorce is back on! It’s no secret that Ellen DeGeneres and her wife Portia de Rossi have been having some problems with their marriage and fighting non-stop about everything from whether or not to have children to Ellen’s temper and Portia’s alleged eating disorders. But, it turns out that their marriage is actually much worse than any of us realized – and the couple isn’t even living together anymore!

Rumors have run rampant for months now claiming that Ellen DeGeneres and Portia de Rossi are getting a divorce, and according to the latest edition of Star Magazine the couple is already broken up and living at separate houses. The April 13th edition of Star Magazine explains, “An investigation has revealed that while Portia continues to live at their huge West Hollywood estate with the family dogs, Ellen has a separate pied-a-terre where she often spends days and nights away from her house.”

An insider dished to Star Magazine that an underlying source in Ellen and Portia’s separation is Portia’s new gig on Scandal. Ellen was always the bread-winner in the family and taking charge – but now that Portia has a major role on the hit show, her confidence is growing and she is no longer letting Ellen boss her around. The snitch went on to explain, “Portia is still delicate. She has been open about her insecurities and eating disorder. At first she liked that Ellen had such a dominant personality, but now it is taking a toll. She can’t keep living like this.”

Ellen isn’t exactly heart-broken over her break-up from her wife and imminent divorce, according to Star the talk show host was just spotted in Los Angeles looking very cozy with a new mystery woman – and Portia was nowhere in sight. Do you think that Ellen DeGeneres is cheating on Portia? Or is their marriage as good as over since they are already living separately? Will 2015 be the year that they finally get a divorce? Let us know what you think in the comments below!