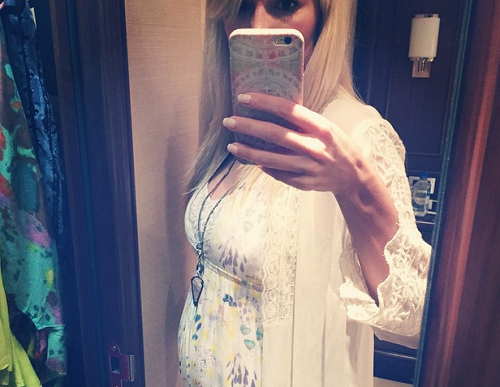 Emily Maynard is pregnant with husband Tyler Johnson‘s child, and of course she took to social media to share that news and reaffirm to all of her followers that she is, indeed, pregnant. Emily, much like most other reality stars, took to Instagram to reveal the first photo of her baby bump, captioning the photo, “too much pizza.” Har har har.

She added that her due date is in July 2015, which is less than a year away. Also, we do have to say congratulations to Emily Maynard and Tyler Johnson, who are one of the few couples leaving the Bachelor and Bachelorette dynasty and actually staying together. Tyler Johnson reportedly proposed last January, and Emily accepted. The couple was only engaged for a few months before getting married in June, and they’ve stayed together happily since then.

There were relatively few breakup rumors and cheating rumors concerning Tyler and Emily, especially in comparison to other Bachelor and Bachelorette alumni. Heck, the fact that they have stayed together for more than a year and are actually expecting a child together is practically a miracle in itself. We all know how this usually works, right? There’s a grand proposal and engagement following the end of the show, followed by months of endless gossip, drama, and the rumor mill turning on itself. Then, after a few months [or even a year] of this, the couple either breaks up or rushes their marriage. In fact, this actually happened with Emily Maynard and Jef Holm, and Emily actually went through quite a few guys before settling on Tyler.

What do you guys think about Emily Maynard’s pregnancy with husband Tyler Johnson? Do you think that even after the birth of their first child, they still stay together? Or will they break up, just like Emily and her first Bachelorette boyfriend, Jef Holm? Once a cheater, always a cheater – isn’t that the saying? And there was no way Emily was going to stay with a broke hobo serving burgers for a living – thus, entering Tyler Johnson.