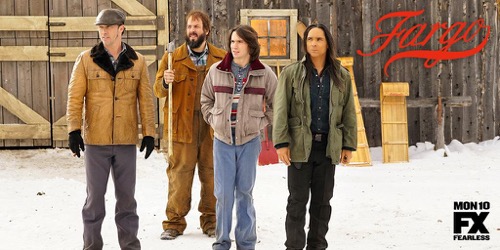 Tonight on FX their original series, FARGO,  based on the Coen Brothers classic airs with an all new Monday October 19, season 2 episode 2 called “Before the Law,” and we have your recap below. On tonight’s episode the Gerhardts get an unexpected offer.

Fargo is an anthology series inspired by the 1996 Coen brothers film. The first season follows a drifter who brings trouble to small-town Minnesota in 2006, while Season 2 focuses on a young state police officer and Vietnam veteran in 1979 South Dakota and Minnesota.

On the last episode, in the second season premiere, a surprising event at a diner disrupted the citizens of a small Minnesota town. Did you watch the last episode? If you missed it we have a full and detailed recap, right here for you.

On tonight’s episode per the FX synopsis “The Gerhardts get a surprising offer, and two unlikely murderers do their best to clean up their mess.”

We will be blogging Fargo season 2 episode 2 tonight with all the up-to-the-minute details at 10PM EST so make sure to come back to this spot and watch the show with us.   Make sure to refresh often so you get the most current info!

Tonight’s episode of Fargo kicks off with Floyd Gerhart and one of her grandson’s opening letters and get well cards, while her husband is confined to a wheel chair in the other room after his stroke, a doctor is at the house checking in on him. She fills a bag with cash and send it with one of the henchmen to “dispurse to the Chinese.” Then Floyd tells her grandson to go round up the guys – they need to have a family meeting.

Floyd explains to her sons that some goons from Kansas City paid her a visit and they want to buy out the Gerharts. No one has no idea where Rye is, his sister says he went out of town yesterday to take care of some things. Floyd says that the guys want to buy them out, but still let them run the organization. The Gerharts begin bickering over which one of them will be in charge now that their Dad is not lucid. Floyd isn’t letting any of the sons take over just yet – she reveals she is going to run the family empire. When the meeting is over Floyd orders them to go find their brother Rye and bring him home.

Hank Larsson is in his office pouring over evidence from the diner murders. He pulls an all-nighter and goes to his daughter Betsey’s house for breakfast, he sits down with his granddaughter and tells her a story. Lou is in the other room on the phone, Betsey tells Hank that he got a phone call and one of victims at the diner was a judge from North Dakota.

Meanwhile, Ed Blomquist is sitting outside of his garage – and staring at the bloody car that his wife Peggy used to run down Rye. When she brought him back home, Rye was still alive and Ed fought him off and killed him with a garden tool and then they threw his body in their chest freezer. Peggy doesn’t want to go to work, she goes though to keep up appearances. Ed stays home from work so that he can get to work cleaning up the garage.

Peggy arrives at the hair salon where she works and all the women are gossiping about the murders at the diner. Her boss tries to get her to go to a seminar next week out of town, Peggy tries to make an excuse about her and Ed saving money, and the trip being too pricey. Then, her boss hounds her about a missing case of toilet paper.

Meanwhile, the goons from Kansas City are trying to find Rye, they think they can convince him to sell out his family. They head to the typewriter shop where Rye was last week – at first the shop owner insists he doesn’t know Rye. Then he starts singing like a canary, and tells them all about sending Rye to North Dakota to get the judge (that is now dead) to free up his accounts so he could buy more typewriters and make money to pay off his debts to Rye’s family.

Ed Blomquist gets to work in his garage, he scrubs all of the blood off from the car and begins using bleach to scrub the garage floor on his hands and knees. Then, he opens the freezer and Rye’s body is frozen solid – right where he and Peggy had stashed it the night before.

Lou is in the car with his wife Besty and their daughter Molly – he pulls over at the Waffle Hut, the inside is still a crime scene and covered in blood spatter. He tells his wife that something isn’t adding up and he just needs to take another look around. Betsy and her daughter play outside in the snow and make a snowman in the parking lot. While Lou is inside looking around – Betsy finds a gun in the bushes that the police overlooked. When Lou comes outside she gives him the gun and he jokes that she is always “doing his job.” A suspicious car rides past the waffle house very slowly while they are outside talking.

A little ways up the road Hank pulls over the suspicious looking car that was driving around the diner – it’s the goons from Kansas City that are looking for Rye Gerhardt. He makes them get out of the car and hand over their ID’s. Mike Milligan and the Kitchen Brothers are pressed by Hank, they insists that they were just passing through towns and they were going to stop at the Waffle Hut – but it was closed. Hank asks them what size of shoes they wear, they answer 10 & 11, and then Mike says that they are getting back on the road and aren’t answering any more questions. Hank agrees to let them go, but he says that if they don’t leave the state ASAP – he is going to put an APB out on them.

After a long day of cleaning up his wife Peggy’s murder, Ed Blomquist heads in to town late at night. He parks his truck infront of the butcher shop, and he has Rye’s body lying in the back underneath a tarp. After he makes sure that the coast is clear, he drags Rye’s body in to the butcher shop. Meanwhile, Peggy brings her friend Constance home from work with her – she says that she needs to use Peggy’s bathroom. While Constance is in the bathroom, Peggy paces nervously outside of the bathroom door. Constance washes her hand and can’t find a towel, she opens the copboard door and finds all of the toilet paper that Peggy stole from the salon.

Peggy sneaks a peek in to the garage – Ed is gone, but the garage is spotless. Constance walks up behind her and sees the smashed windshield on the car – she lies and says that Ed was drinking and driving and hit a tree the night before. Constance flirts with Peggy and says that she can tell that she is a bad girl, Peggy rushes her out of the house before anything it can get any more awkward.

Hank shows up at the Waffle Hut, Lou is sitting outside in the freezing snow. He tells Lou about the guys from Kansas City. Lou confesses that he doesn’t want to go home because he feels like he is missing something. Tonight’s episode ends with Ed in the butcher shop late at night grinding up Rye’s body …