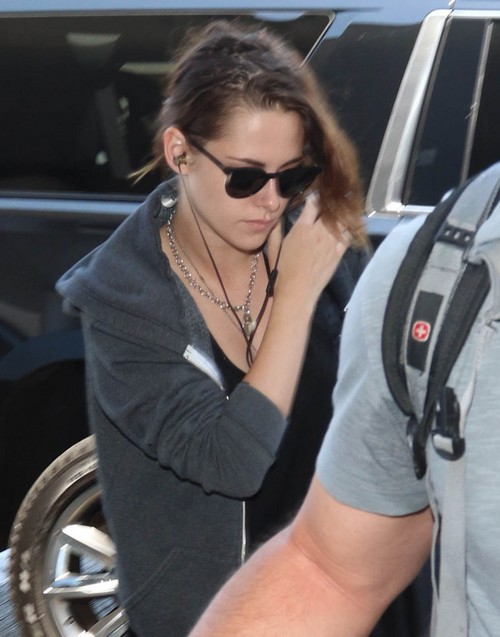 Robert Pattinson plans on marrying FKA Twigs, but she is calling all the shots. Rob has been forbidden from inviting Kristen Stewart or any former ‘Twilight’ cast members to their wedding! Are the cracks in their relationship already beginning?

T-Pain “accidentally” let Robert Pattinson and FKA Twig’s engagement news slip in an interview in April. The pal of Twigs tried to play it off as an April Fool’s Day joke, but People later confirmed their wedding plans. Since then, a rumor FKA Twigs was pregnant followed after reports claimed she wasn’t drinking at Coachella. Months later, FKA Twigs isn’t sporting a baby bump, but the musician did send fans into a frenzy after sharing a photo of herself wearing a white lacy dress while getting her hair cut. Everyone lost their shiz thinking Twigs and Robert Pattinson were already married.

A secret and very quiet wedding might be in the works in the near future. Twigs insists the wedding be very low key and the guest list be limited to people she trusts. That means, the entire cast of ‘Twilight’ and anyone else who might have ties to Rob’s ex, Kristen Stewart, are forbidden from attending. No one wants to forget the stigma that comes with Robert Pattinson, Twilight, and Kristen Stewart more than FKA Twigs.

While Robert is trying to move on by cementing a career and notoriety with new projects, at least Pattinson accepts that ‘Twilight’ and his showmance with Kristen Stewart launched him into fame. “The success of Twilight is something special that I will never regret. Since I started this career I am trying to improve myself, to challenge myself with different roles compared to those I have already interpreted,” Pattinson explained during an interview with Italian press. “If in 10 years they will speak of me still just as “the one from Twilight”, the blame will be mine alone.”  Pattinson could have added never repeat  to never regret in the statement above when talking about his past success…

Twigs hates all things Twilight and Kristen Stewart. While Claire Pattinson, Robert’s mother, prefers FKA Twigs to the Trampire, but will FKA Twig’s fear and hatred of Rob’s past eventually take its toll? The Pattinson family supports the marriage to FKA Twigs, which they probably believe will put an end to the Kristen Stewart and Robert Pattinson saga. That’s very unlikely. In fact, fans will probably be waiting for a cheating scandal involving Kristen that will end Robert Pattinson and FKA Twigs’ marriage with a bitter divorce.

What do you think? Is FKA Twigs being too sensitive about Robert Pattinson’s connections to Twilight and Kristen Stewart? Will her insecurities eventually becoming a breaking point for Pattinson? Let us know what you think in the comment section below.