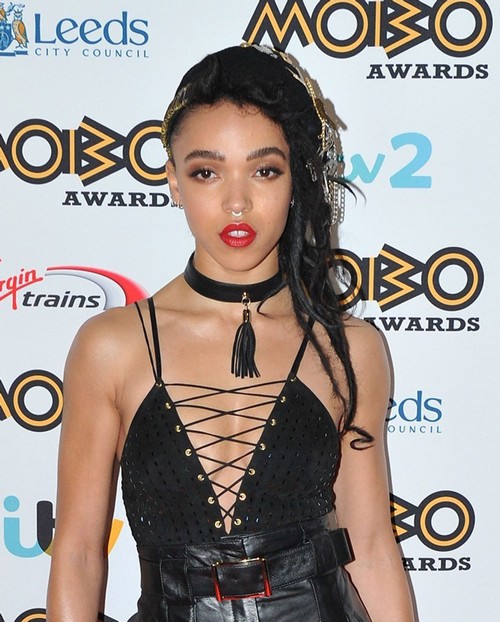 Robert Pattinson practically hid from the spotlight while FKA Twigs shined at the MOBO awards. RPatz was laying low to allow the focus to remain on his girlfriend, Tahliah Barnett. It’s pretty clear Twigs is enjoying the attention and fame that comes with dating Robert Pattinson, as her career has become a priority and comes first in their relationship.

Photos of Rob supporting Tahliah show him sitting quietly at her table during the MOBO Awards. The ‘Twilight’ star sat out the red carpet, leaving Twigs to smile and pose solo. Barnett looked trendy a pop-star worthy in a leather jumpsuit, while Rob wore black pants with matching button shirt and a brow and tan zip jacket.

This is the first time the two have been spotted in public together in weeks. Last time Robert and Twigs were photographed together was at a dinner they enjoyed with friends after Tahliah sat in the front row of the Versace fashion show. Again, Rob sat the event out, giving all the attention to Twigs.

Things have been reportedly tough for Pattinson and Barnett, as Robert’s filming schedule put him in Belfast, while Twigs enjoyed the spotlight in Califorina. Their relationship was so strained they pushed back their engagement not once, but twice.

The engagement is still on, but appears to be on very thin ice. “There isn’t a rush to get married. Fall plans turned into winter plans and now there are no specific plans, but they still plan on getting married,” a source told E!

As CDL has covered, Robert Pattinson is an odd creature when it come to the press, but isn’t afraid to bend it to his needs. FKA Twigs appears to take the same view, as she has openly bashed anything mainstream, but craves the instant fame that came with dating Pattinson and continues to use it shamelessly. Now, it’s becoming painfully obvious Twigs’ career is her priority. While she is still wearing her engagement ring, Tahliah Barnett is not shy in using the attention to climb the ranks of notoriety.

What do you think of Robert Pattinson’s absence at red carpet events? Should he by FKA Twigs’ side or is he simply handing over the spotlight to her? Let us know your thoughts in the comment section below.