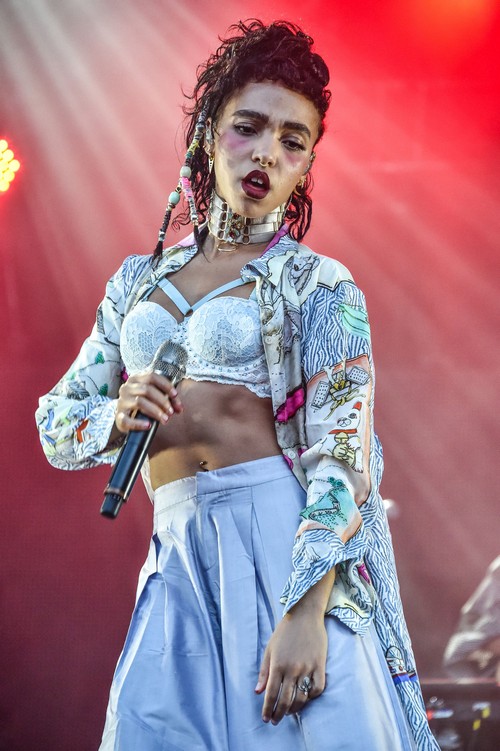 Is FKA Twigs driving Robert Pattinson away with her desire to alienate Kristen Stewart and the entire Twilight cast by banning them from her wedding? Despite being in the middle of planning her wedding, FKA Twigs recently stopped by Montreal to perform at the Osheaga Music and Arts Festival on Friday, July 31. FKA Twigs performed a 12 song setlist for a countless amount of her die-hard, cult-like, following.

Bad Feeling Mag was in attendance at the Osheaga Music and Arts Festival and said that FKA Twigs “had the most dramatic set of the day.” They go on to describe her set as a performance full of her light vocals combined with an immense amount of strobe lights. They go on to say that her FKA Twigs made it very clear that she has a great background in dance, as she danced across the stage and entertained the entire crowd with her sultry sound.

FKA Twigs may have won over the crowd at the 2015 Osheaga Music and Arts Festival, but recent reports are stating that Twigs may be losing when it comes to her home life. We recently reported that FKA Twigs is attempting to call all of the shots at her wedding with Robert Pattinson, and has even forbidden Robert from inviting Kristen Stewart, or any ‘Twilight’ cast member to the wedding. Forbidden your lover from inviting their friends to a wedding is definitely not a great start to any marriage, and we cannot imagine that Robert Pattinson is happy with FKA Twigs decisions.

Twilight has played such a huge part in Robert Pattinson’s life, and for FKA Twigs to forbid him from inviting his friends from that experience is wrong on so many levels.

Robert Pattinson recently spoke with the Italian Press on how important Twilight has been to him and he said, “The success of Twilight is something special that I will never regret. Since I started this career I am trying to improve myself, to challenge myself with different roles compared to those I have already interpreted. If in 10 years they will speak of me still just as ‘the one from Twilight’, the blame will be mine alone.”

What do you think FKA Twigs calling all of the shots in her relationship with Robert Pattinson. Will these decisions eventually push Robert away and lead to a wedding cancellation? Let us know in the comments below.

FKA Twigs Day 1 of the Osheaga Music and Art Festival on July 31, 2015 in Montreal, Canada. FameFlynet