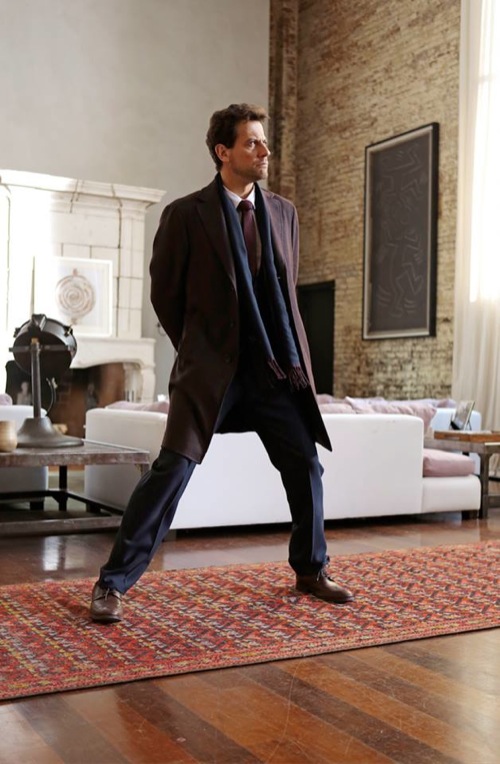 Tonight on ABC their new show Forever continues with an all new Tuesday January 6, season 1 episode 12 premiere and we have your weekly recap below. On tonight’s episode called, “The Wolves of Deep Brooklyn,” Henry [Ioan Gruffudd] returns to work to investigate the murder of a young investor.

On the last episode, when a taxi cab driver was killed with an antique sword, it was just the start of the tangled web the anonymous caller weaves to draw Henry under his influence. But what was “Adam” really after? After a second victim was murdered, “Adam” attempted to frame Henry for the crime. Can Henry trust Jo to tell her the truth? Or is it time for Henry and Abe to leave town? Just as they get ready to flee, Henry attempts to exact revenge on “Adam,” which culminates in the shocking revelation about the true identity of Henry’s secret stalker. Did you watch the last episode? If you missed it, we have a full and detailed recap, right here for you.

On tonight’s episode as per the ABC synopsis, “Greed is definitely not good when Henry and Jo investigate the murder of a young financial investment phenom from humble beginnings who turns up dead near the East River. Coincidently, he also happens to be the son of one of Abe’s wartime Army buddies. Henry’s first case back on the job after a leave to recover from killing a man has Jo and Lt. Reese keeping him under observation out of an abundance of concern. Meanwhile, unbeknownst to Henry, Abe decides to play detective with his Army buddies to solve the murder with surprising results. In a touching flashback, Henry recalls his anxiety over letting a 17-year-old Abe go to Vietnam after he is recruited by the Army.”

Tonight’s episode is going to be another great episode, which you won’t want to miss. So be sure to tune in for our live coverage of ABC’s Forever Season 1 Winter Premiere— tonight at 10PM EST!

Ever since he killed someone, albeit because he was manipulated, Henry has been absent from work. And he’s also kept his distance from his very concerned friends when they tried to reach out to him. So imagine their surprise at his sudden return to work one day.

He just popped up and although he had been absent for weeks he appeared to be fine. Henry was oddball self and truthfully that left Jo more worried about him than ever. She’ cop after all and she know taking a life shouldn’t be taken lightly no matter the circumstances. But Henry swears his fine and all he wants to do is focus on their latest case.

You see Henry returned to work because the latest murder is close to him. The victim was a young man and was in the prime of his life. Then someone killed him and threw his body in the river.

And normally a man in Henry’s position would try to distance himself from getting involved on an emotional level with cases but this time the victim was also a son of one of Abe’s friends. Though “friend” doesn’t really cover it. The victim’s father had also served with Abe in Vietnam and Abe basically owes his life to him. So Henry has to return the favor. Marco saved his son – the least he could is get justice for Marco’s son, Jason.

However investigating Jason’s murder proved to be tricky. Jason was an investment banker and generally that means he has long list of people that want to kill him. Though Jason appeared to be more successful than the Average Wall Street Joe.

Jason was making money hand over fist yet when an old friend from Brooklyn approached him – he suddenly hit a wall. The friend had given Jason thirty grand but after some time had passed – the friend needed his money back and Jason stalled in doing so.

He kept coming up with excuses until a fight broke out in Jason’s office for everyone to see. After that, Jason was warned about letting in undesirables. His mentor and boss told him he had to cut off people like that from the old neighborhood.

Yet on the night he died, someone had driven in Jason’s car to the very same garage the former friend worked in.

The person tried to pretend to be Jason but as a childhood friend the mechanic was able to tell the difference. And once he spoke to the cops – he pinpointed them to who he saw driving Jason’s car on the night he was murdered. Though no one thought Jason’s murder would lead back to his firm.

Jason worked at very prestigious firm and yet they might have lost some of that prestige when the cops came storming in to arrest one of their bankers. Apparently, the same guy that went on to take Jason’s office was also the one that disposed his body.

But he was not the killer. Just a cleanup guy who was willing to move a dead body in order to go up in the world.

So suspicion turn towards the man he must have been taking orders from. Oliver, Jason’s boss, is a very powerful man and he can be slippery to catch because not long after one of lackeys was taken in for questioning – suddenly another person working for him wanted to confess to the crime.

Hence, there was a chance that Oliver would get off, but as luck would have it he hadn’t counted on Abe. Sneaky, sneaky Abe. Abe wanted to help in the investigation so technically he committed a minor felony to do just that.

He and a friend climbed onto Oliver’s yacht and illegally stole several files his files he had hidden there. Those files revealed Oliver had been stealing money from his clients for years. The industrious investment banker was front and secretly he had been running Ponzi scheme.

And, well, once information like that gets out then all of Oliver’s assets will be immediately get frozen. This is something the woman, he had made off to take the rap, hadn’t known about beforehand but once she was filled in – she turned on Oliver. Oliver had killed Jason when the other man found out about the scheme. It seems he wanted to repay back the investment the old friend had given him and he was even willing to pay for it out of his own accounts.

But Oliver was never going to allow the truth to come out so he killed Jason and really all that was left was for Joe to bring in.

All of Oliver’s partners turned on him so it was pretty easy case to finish. And although it was a job well done – Jo was still left unsettled by what she saw. Regrettably, during the investigation, Jo saw Henry do some pretty reckless things and now she doesn’t think he’s as fine as he claims.

So now she’s going to be watching closely!