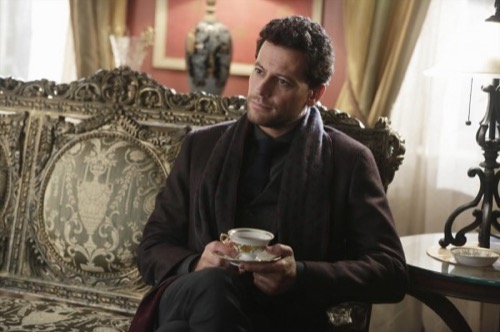 Tonight on ABC their new show Forever continues with an all new Tuesday February 10, season 1 episode 15 called, “The King of Columbus Circle,” and we have your weekly recap below. On tonight’s episode, Henry [Ioan Gruffudd] and Jo [Alana De La Garza] investigate the death of an exiled king.

On the last episode, was Karl Haas a hero or a traitor and thief? When he ended up in the morgue, it started an explosive chain of events with Henry and Jo racing to track — not just a murderer — but to solve a decade old notorious art crime. Karl’s son, Erik, who was an art dealer, inherited from his father priceless work of art stolen by the Nazi’s during World War II. Meanwhile, Adam paid an unsuspecting Abe a furtive visited, and Henry’s paternal instincts forced a face-off with his nemesis. Flashbacks took Henry to 1814 where he was shocked to learn that his own father’s shipping company was involved in illegal and immoral practices. Finally, Abe received a priceless gift. Did you watch the last episode? If you missed it, we have a full and detailed recap right here for you.

On tonight’s episode as per the ABC synopsis, “what appears to be the dead body of an ordinary old man, turns out to be of royal lineage with an unusual connection to Henry. A familiar scar and radioactive poison point Henry and Jo to the man being an assassinated king in exile. Moreover, a half century earlier, Henry remembers performing an emergency, life-saving operation on a boy while on his honeymoon with Abigail. The boy turned out to be a prince of a tiny crumbling kingdom. Life came full circle as the boy grew up to be a king — and now, the murder victim lying in Henry’s morgue. The mystery deepens when other members of this royal family are poisoned and it is revealed that the king has an heir. Meanwhile, Abe continues to investigate his roots and discovers something amazing about his bloodline.”

Tonight’s episode is going to be another great episode, which you won’t want to miss. So be sure to tune in for our live coverage of ABC’s Forever Season 1 Episode 15 tonight at 10PM EST! In the meantime, check out a sneak peek of tonight’s episode below.

Now that Abe knows his real last name, he’s been looking into extended family members trying to build a complete family tree on tonight’s episode of “Forever”. And so far Henry has been very accepting of his actions. After all Abe just wants to know where he comes from and it seems that Henry’s latest victim just wanted to reconnect with his roots as well when someone murdered him.

An exiled king was murdered in Manhattan yet Henry is probably one of the few people that knew this king when he was a child. Apparently, during their overdue honeymoon, Henry and Abigail were traveling past a small kingdom when they ran into the heir who was merely a little boy at the time. And the boy was very sick so Henry had been the one to treat him.

Whatever he ended up doing, it must have saved that little boy’s life because he eventually he grew up into a man and was in fact enjoying his golden years when he was assassinated.

The king was suffering from terminal cancer. He could have fought it with chemotherapy and other forms of medicine that would delay the cancer’s progress if not save his life but ultimately he chose not. And he did that for a reason. Not long before he was killed, he had actually reached out to the current government of his birth and it seems he wanted to go back home to die. Though, someone must have stopped him just to spite him.

As the story goes, the King and his late father were brutally deposed after a coup. The King who was, again, a boy at the time was one of the few family members that survived his father being ousted. However, someone apparently wanted to continue to hold the royal family accountable for everything their former government did back in the old country.

Unfortunately, not only was the King assassinated but someone also tried to target his family!

The King was killed with radiation. Someone must have gotten to him while he was out having lunch with who would later be revealed as his secret love child. It seems that 25 years ago, the King cheated on his wife and fathered a daughter with someone else. So, before he returned home – he asked his newly found daughter to come with him.

Yet, she appeared to have thought he was full of it when he started telling her he was a king in exile and she a princess.

So Lydia stopped talking to her father after that and it wasn’t until Henry and Jo found her that she realized her father wasn’t crazy after all. Then she realized she was now an orphan having wasted the last few hours she could have spent with her father.

Sadly, Lydia was given up for adoption but ended up in foster care so she never knew family. And for someone to that come close to having one – his death came as especially hard.

Though, the King had still kept quiet about her because he didn’t want to upset his wife. He had told Lydia that if she had ever found out – she would kill him. But, nothing could farther from the truth.

The queen didn’t kill her husband. Though someone did try to kill her in the same way they must have killed the King. Henry and the detectives were asking the Queen about whereabouts when she collapsed on them.

Henry, thankfully, identified the collapsed as having been caused by radiation poisoning and he was able to save her life. But then the situation became a race against the clock to save Lydia.

Because whoever hated the King enough to kill his wife wouldn’t hesitate about killing the King’s only child.

Lydia, once she accepted the truth about her father, had gone to embassy to get a visa in order to visit her father’s home country. Her intent was to take her young son there so that he knew about their roots. Yet, when she filled in the form at the embassy, she had put down who her father was and that alerted the killer.

The man that had fingerprinted her was the same man that killed her father. Apparently, he was wiping out the whole family as part of a blood feud. His family was hurt back in Akeesh and now he wanted to destroy the entire royal family for it. Including Lydia and her infant son.

So Jo and Henry quickly raced to Lydia’s apartment and while they found a knocked out Lydia – her father’s killer was still in the apartment.

The lights were out and the killer would have gotten to Jo if Lydia hadn’t finally come to and alerted her to the danger. So Jo was fine after that and their killer was dead, but Lydia had been shot in the process.

The wound wasn’t that dangerous and by time Lydia did come to in the hospital – she had found her father’s wife waiting by her side. The Queen had been taking care of Lydia’s son and it appears she loves her new grandchild. So much so that she’s reaching out to Lydia.

So Lydia did find family in the end and for that matter so did Abe. Because, once he started to look into his family tree, he found a common ancestor with Henry. Meaning they’ve been related by blood all along and after they started to look for it – they even spotted a resemblance between them.