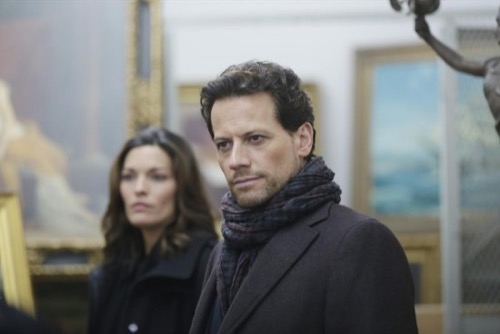 Tonight on ABC their new show Forever continues with an all new Tuesday February 3, season 1 episode 14 called, “Hitler on the Half Shell” and we have your weekly recap below. On tonight’s episode, a decades-old art crime is investigated by Henry [Ioan Gruffudd] and Jo [Alana De La Garza]. Meanwhile, Abe [Judd Hirsch] receives a priceless gift.

On the last episode, Henry and Jo’s murder investigation of an ex-con, who was being framed for a jewelry story heist, revealed a special connection between the victim and Jo’s late husband, Sean, who was an assistant district attorney. Jo’s evocative memories reflected her warm and wonderful relationship with Sean, which became almost too painful for her to bear. Flashbacks traced Henry’s life to 1816 London where he ended up in jail. Incredibly, a priest, who was his cell mate, gave Henry a second chance at life. Meanwhile, Abe attempted to snare a thief who he believed walked off with a “priceless” antique from his store, and Henry was there to comfort Jo in her time of distress. Did you watch the last episode? If you missed it, we have a full and detailed recap right here for you.

On tonight’s episode as per the ABC synopsis, “is Karl Haas a hero or a traitor and thief? When he ends up in the morgue, it starts an explosive chain of events with Henry and Jo racing to track — not just a murderer — but to solve a decades old notorious art crime. Karl’s son, Erik, who is an art dealer, inherited from his father priceless works of art stolen by the Nazi’s during World War II. Meanwhile, Adam pays an unsuspecting Abe a furtive visit, and Henry’s paternal instincts force a face-off with his nemesis. Flashbacks take Henry to 1814 where he is shocked to learn that his own father’s shipping company was involved in illegal and immoral practices. Finally, Abe receives a priceless gift.”

Tonight’s episode is going to be another great episode, which you won’t want to miss. So be sure to tune in for our live coverage of ABC’s Forever Season 1 Episode 14 tonight at 10PM EST!

Tonight’s episode begins now – Refresh Page often to get the most current dates!

Henry was called in to investigate an arts dealer’s murder on tonight’s all new episode of “Forever” yet instead of dealing with a simply murder and robbery (several of the victim’s art pieces were missing from the scene) – the NYPD now find themselves in the middle of a Nazi mystery.

Unfortunately, their victim was struck and murdered by an artifact that had been stolen from the Louvre by the Nazis and ay first it looked like their victim had been trafficking in other stolen goods from that era. Karl Haas was apparently the son of a notorious Nazi that had escaped to the US after his government had fallen and so Karl himself came by certain possessions honestly when his father died. But all evidence does point to him knowing about his father’s true origins and that he knew the truth behind his father’s art collection.

So, right away, Jo and Henry thought they were dealing with scum. Yet, the truth turned out to be the complete opposite.

Karl did know about his father and the art but he had taken it upon himself to return these stolen items to their rightful owners. He would look for heirs and give them back their family’s property and all he would ask in return is that they keep what he’s doing a secret.

You see, Karl didn’t want the attention. He was worried people might target him in order to get their hands on the Nazi treasure. And he didn’t want to risk what he was doing by constantly fending off thieves.

However, someone knew about what he was doing and targeted him anyways. Hence the stolen artwork from his home that he had told his banker he was going to soon be returning.

Though, funnily enough, there were two thieves that broke into Karl’s home that night. One thief stole back his family’s artwork and another took the rest of the multi-million dollar painting Karl was just going to hand over for free. So there ended up being two thieves and, scarily, two murderers.

It seems that whoever killed Karl wasn’t the same person that later targeted his banker, Julian Glausser. As the story goes, Julian and Karl disagreed about handling the artwork. Karl was merely going to return it all but Julian wanted to make a profit. So on the day Karl was murdered – the two of them were overheard arguing.

They were overheard by a thief but his intel was proven to still be good. However, by time Jo and Hanson got their warrant – Julian had already made a run for it and taken the Nazi art with him. Though, with the help of Hanson’s somewhat difficult brother, the detectives found out Julian didn’t make it too far.

Julian was found viciously murdered alongside all of the art he was going to sell for profit. And whoever had killed him wasn’t the same person that had killed Karl. Not only were their murders treated differently but Henry realized at the last minute that Karl had been handled with care after he died. Meaning, whoever hurt him also cared about him.

And that left only one possibility – Karl’s son.

Henry knows a lot about faulty father and son relationships. Sadly, one of the reasons Henry was traveling to the colonies (which later turned into the first time he died) was because he wanted to escape his own father’s legacy. It appears the older Morgan had been dealing in the slave trade and Henry had wanted no part in it. So he left England not long after his father’s death and he wasn’t planning on ever returning.

And yet despite their relationship – Henry had closed his father’s eye lids once the older man had passed on and someone had closed Karl’s eyes after he had died. So Henry led Jo to Karl’s Erik.

Erik was struggling to pay his rent so when he found out his father was sitting on billions of dollars but was refusing to help him out – he hit him. It was blow and it ended up being enough to murder someone.

Afterwards, Erik had sought out Julian and the two of them were going to sell off the artwork. Though, someone got to Julian before they could start making money. And the DNA sample they had gotten off o Julian’s corpse verified that it wasn’t Erik who killed him.

The DNA showed antibodies from things like the plague and other diseases that hadn’t been around for a hundreds of years. Meaning Adam had gotten to their erstwhile banker.

Henry covered for him but he had felt uneasy about doing so. Adam had come back to town supposedly looking to make amends and while he had also assured Henry that he would never hurt Abe – he still wanted both men to do him a favor. It seems Adam had spent some time in the death camps and the Nazis had experimented on him hoping to gain the answer to immortality (hence Adam’s reasons on why he would never hurt Abe who was another survivor of the death camps). And it was as he was at other’s mercies – they stole something from him. It was a knife from 44 BC and Adam apparently wanted it back.

But instead of using his old methods of threatening Abe and Henry – Adam gave them a book he had stolen from Julian (a man Ada felt compelled to kill) and it ended up revealing who Abe’s birth parents were. Before that, Abe had no idea about their names but now he could look through the Holocaust museum with proper information.

With names, he found pictures of his parents and he finally learned where he came from.