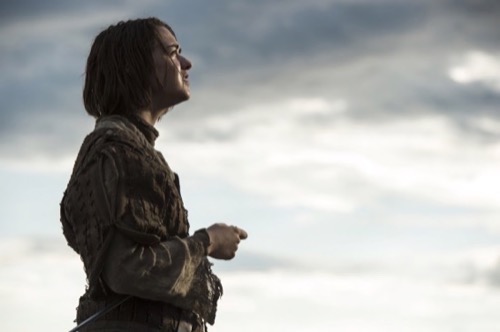 Tonight on HBO, Game of Thrones is back with an all new Sunday, April 19 season 5 episode 2 called “The House of Black and White,” and we have your weekly recap below. On this evening’s episode, Arya [Maisie Williams] arrives in Braavos; Brienne [Gwendoline Christie] and Podrick [Daniel Portman] find danger while traveling; Cersei worries about Myrcella in Dorne when Ellaria Sand [Indira Varma]  seeks revenge for Oberyn’s death; Jon is tempted by Stannis. [Stephen Dillane]

On last week’s episode, in the Season 5 premiere, Varys struggled to convince Tyrion to think outside the box while discussing a potential occupant of the Iron Throne. Meanwhile, Stannis leaned on Jon to secure loyalty from a rival; Daenerys ignored tradition to remain on her progressive path; and Cersei and Jaime tried to move on from Tywin’s demise. Did you watch last week’s episode? If you missed it we have a full and detailed recap, right here for you.

Arya approaches Braavos. Braavos bustles with people and the atmosphere is happy and energetic. Arya is taken to the House of Black and White, where she’s told she can find the man she’s seeking. The House is impressive. She walks up to the double doors–one black, one white. She knocks. An old man answers the door. Arya asks for Jaqen, the man who gave her the special coin, but the individual at the door says that there’s nobody here by that title. She begs the man to let her in, says she has nowhere else to go, but the man says, “You have everywhere else to go.”

Arya waits on the front steps, reciting the names of the people who’ve wronged her. Night passes. A new day comes. She tosses the coin Jaqen gave her into the sea.

Brienne and Pod are eating and drinking at an alehouse. Petyr and Sansa are also there. Pod tells Brienne that Sansa Stark is also here. Brienne approaches Sansa and tells her that she was her mother’s sworn sword. Brienne asks Sansa if she may have a quick word, but Sansa declines her invitation.

Podrick and Brienne escape the alehouse on horses. They run into the woods, being chased by Petyr’s men. Pod suggests to Brienne that, since both Stark girls rejected her service that, perhaps, she’s released from her vow. Brienne isn’t having any of this, though, and says that Sansa – despite what she thinks – probably isn’t safe with Little Finger. They ride on.

Cersei is sent her daughter’s necklace by the people of Dorne, which is an act of war. Jaime declares that he will be going to Dorne to get their daughter back – and he’s not going alone.

Jaime enlists the help of Bronn, promising him a much better wife and castle if he helps him with his mission to Dorne.

Meanwhile, Jorah and the Unsullied locate a Son of the Harpy. Daenerys contemplates what to do with the man they’ve found. She wavers between a fair trial or execution. She decides upon a fair trial, by which execution might result.

Varys and Tyrion head for the road leading into Mereen.

Stannis is mad at Jon Snow for ending Mance’s life prior to his burning.

Stannis wants Jon Snow’s help taking the North. Stannis asks Jon Snow to join him and, if he does, he’ll remove his title of “Bastard.”

John Snow is made leader.

Arya explores Braavos. She’s confronted by some hoodlums who want her sword. The old man Arya met earlier watches her. After Arya scares off the men, the old guy walks away and Arya follows him back to The House of Black and White. On the front steps, the old man switches his face to reveal a man with the face of Jaqen, though he says that is not his name – that’s not who he is. He is “No one.”

Jaqen proceeds into The House and grants Arya entry. He has a smile on his face as she steps inside.

One of Daenerys’s counsel members kills the Son of the Harpy. He went against her wishes. She says he had no right to take the man’s life, so she makes an example of him in front of both the citizens of Mereen and the freed slaves. She executes him, which causes an uproar.

Daenerys flees safely. Later, she’s visited by one of her dragons, Drogon. She nearly touches the nose of her dragon, and then it flies away into the night.