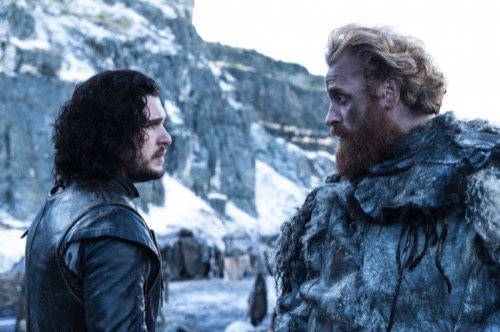 Tonight on HBO, Game of Thrones is back with an all new Sunday, May 31 season 5 episode 8 called “Hardhome” and we have your weekly recap below. On this evening’s episode, in the season 5 episode 8, Arya [Maisie Williams] makes progress in her training; Sansa [Sophie Turner] meets an old friend; Jon [Kit Harington] takes to the road; Cersei’s [Lena Headey] troubles pile up.

On last week’s episode, Jon prepared for conflict. Sansa tries to talk to Theon. Brienne waited for a sign. Stannis (Stephen Dillane) remained stubborn. Jaime attempted to reconnect with family. Did you watch last week’s episode? If you missed it we have a full and detailed recap, right here for you.

Daenerys meets with Jorah and Tyrion. Tyrion tries to convince her that she needs someone by her side who knows about the lands – and families – she’s about to conquer. He also convinces Daenerys that she should not kill Jorah, as he’s now a changed man. Daenerys agrees not to have him killed but wants him to leave the city. Jorah leaves the hall, takes a look at his wrist, currently being overtaken with stone flesh, and walks away.

Meanwhile, Cersei’s still locked up and being judged by the Faith.

Meanwhile, the House of Black and White, Arya continues her training under the tutelage of Jaqen. In and order to please the Many Faced God, Arya begins to adopt a new identity in an effort to learn the ways of playing the role of another human being. Her disguise is Alana, a young girl with an oyster cart.

The High Sparrow’s currently devising a case against Cersei. Qyburn comes to visit her and informs her that her son isn’t taking the arrest of his mother and Margaery very well. Qyburn tells Cersei that there’s a way out of this mess: she can confess to the High Sparrow. Cersei is adamant that she will not do this. After all, she made him into the power that he is, and she will not stoop to the level of a commoner and beg for his forgiveness.

Reek brings Sansa food. She asks him why he betrayed her – on more than one occasion. Reek says that he’s no longer Theon. Next, he confesses that he actually didn’t kill her brothers. They were just two farm boys that he burned to disguise their true identities. Sansa wants to know where her brothers went, but Reek doesn’t have any idea and runs out of Sansa’s chamber.

Ramsay and his father plan an attack.

Daenerys and Tyrion have a goblet of wine together. Daenerys is still trying to feel out Tyrion’s motivations. Tyrion says that Varys convinced him that he should seek her out, and he says that this new “mission” gave excitement to what he thought would be his final days. Daenerys, ultimately, says that she will not kill him and she will not banish him. She makes him her advisor. She says that she seeks the Iron Throne, and she wants his help to realize that goal.

Jorah returns to the slave trader who bought him. He wants to fight for her (Daenerys).

Gilly helps nurse Sam’s wounds. Olly comes into his room to bring him some food to eat. Olly asks Sam why Jon Snow would leave to save the Wildlings. Sam informs him that Wildlings are people, too, and that if anyone is to stand a chance against the White Walkers, then they’re going to need all the help they can get.

Meanwhile, Jon Snow arrives on the shores of the Wildling camp, Hardhome. Jon asks Tormund if it’s a crazy thing to trust him. One of the Wildlings in the camp comes up and tells Tormund that he’s a traitor for aligning himself with the “crows.” Tormund proceeds to kill him in an effort to establish his dominance and informs the crowd that he’d like to talk with the elders.

One of the elders asks Tormund if he can vouch for Jon. Tormund does. The elder says that she agrees, but some of the other people aren’t too keen to hand over their lives to the people that have caused them so much grief.

Not all of the Wildlings load up on the boats. Jon Snow says that they are leaving too many behind. Tormund says that they will eventually come around, as they are running out of food to hunt and winter is coming fast.

Meanwhile, the White Walkers attack the village. Everyone tries to rush onto the boats to get to safety. It’s chaos. The zombies continue attacking. Jon orders the Knight’s Watch to attack the White Walkers, even though their chances of success don’t seem too good. They try to fend off those that have already made it past the camp’s walls, but their efforts are thwarted. Jon Snow rushes to a hut to get the dragon’s glass left behind when he encounters a leader of the White Walkers. Jon Snow battles him and manages to destroy him. Meanwhile, another White Walker, who’s dressed like a White Walker King, looks on from an icy cliff.

The battle grows intense. There are just too many White Walkers for the humans to fight. Jon Snow makes it out of Hardhome . . . but just barely.

When he’s rowing away from shore, he sees the White Walker King raise his arms. As he does so the Wildlings that were just killed awake from the dead. Their eyes are cold and blue. They’ve been turned into White Walkers.