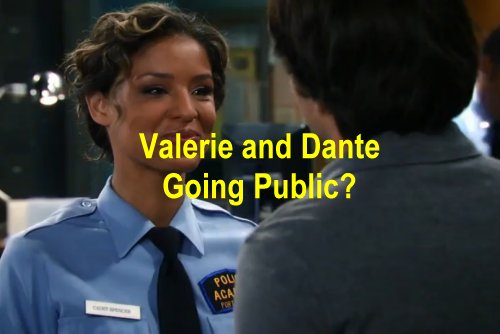 When Lulu dropped by the loft a couple of mornings ago, Dante didn’t try to hide that he had been with Valerie and now anyone watching them can tell there is chemistry between them. Valerie looks really cute in her police cadet uniform and Dante checks her out.

Dante admires, then compliments Valerie who is all smiles and giggles. The two are double busted, though, when both Nathan West (Ryan Paevey) and Commissioner Jordan Ashford (Vinessa Antoine) spot them flirting. Dante and Valerie step apart when they see their co-workers.

But what’s clear is that Dante is not hiding his attraction for Valerie and she’s thrilled to get the public attention. Dante made Valerie feel like a dirty secret after they slept together the first time, but now it looks like game-on for the two of them.

How will Lulu handle the revelation that her husband is taking his new romance public? No doubt Commish Jordan will have something to say about this development, but she may back off once Valerie explains Dante and Lulu broke up.

But is it okay for a detective to date a trainee cop? Even if there is a rule against it, it’s doubtful that Valerie and Dante will keep their hands to themselves. Lulu has made Dante feel like crap while Valerie still sees Dante as a hero.

Simply put, Valerie makes Dante feel good. And it’s not just in the bedroom. “General Hospital” spoilers tease that Dante wants to keep Valerie around because she’s an ego booster who sees him as someone to fight for.

Remember how Valerie laid into Lulu and told her that losing Dante was her own fault? Valerie is ready to fight to keep Dante. Lulu, on the other hand, only wants to fight with Dante – and he’s over it.

But what will Nathan do about what he saw? Will he confront Dante? If so, Dante will tell him he and Lulu are separated, but Nathan may caution him against moving on with Val.

Now that Nathan and Maxie Jones (Kirsten Storms) aren’t keeping any secrets about the Falconeri’s love life, they will likely swap info on what they know. Maxie has the story from Lulu and Nathan will have it from Dante.

The two should quickly compare notes. Will both Nathan and Maxie take Lulu’s side? Or will Nathan obey the bro-code and side with his partner even though Maxie won’t like it?

We also have to wonder how soon we’ll see Valerie and Dante out on a real date – maybe at the MetroCourt for dinner?

When “Valante” does have an evening out, how many people will stop by to criticize them for coupling up? That won’t be a fun evening… Maybe Valerie and Dante should stick to take out and watching football at the loft!

So GH fans, what do you think about Valerie and Dante taking their flirtation public? Are Lulu and Dante done for good? Share your thoughts in the comments below!

Don’t miss a moment of GH and check back often with CDL for tons more “General Hospital” spoilers and gossip.