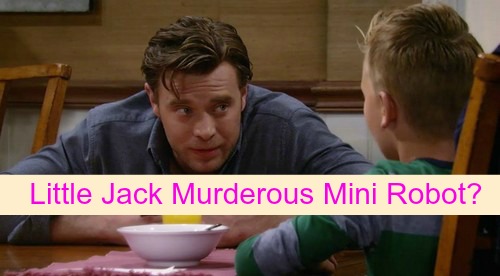 “General Hospital” (GH) spoilers have teased for months that there is far more going on with little Jake Spencer (James Nigbor) than anyone realizes. Liz Webber (Rebecca Herbst) has been very busy keeping her dirty secrets about Jason Morgan (Billy Miller) buried and trying to drag him down the aisle before

Sam Morgan (Kelly Monaco) realized Liz had her talons in her “dead” hubby. Liz has been so distracted, in fact, that she’s failed to notice all of the warning flags about little Jake.

It’s weird enough that little Jake popped back up from the dead, but weirder still that no one seems to be digging into why and how this happened. Carly Corinthos (Laura Wright) has dropped the matter of where Josslyn Jacks’ (Eden McCoy) kidney came from and whose organ is in her daughter’s body.

They can still DNA test the kidney with a quick blood draw to see if it’s a match for any criminals, family members, or other parties unknown. But nope, Carly dropped it.

And everyone else has now absorbed little Jake back into the fabric of the community without figuring out if the kid is a fit and is psychologically and emotionally okay. Liz ran little Jake down to GH to get a standard checkup and that was the end of it.

He has been held for years on an island with a sociopathic madwoman. Did the notion of a couple of therapy sessions never occur to any adult in his life? Nope. They are all pretending things like this happen every day. Even in Port Charles, they don’t…

Plus, it sure seemed like Helena surrendered the kid pretty easily (some would say too easily) to Lucky Spencer (Jonathan Jackson) and his parents. After all, Helena had the kid on the remote island for years – how did Lucky suddenly find out he was there?

It’s likely Helena leaked the info to allow him to be found. That means Helena wanted Jake to be “rescued” so she could put him in play in Port Charles as her operative. Little Jake is very likely a mini-Manchurian candidate.

If you haven’t seen the movie, the original Manchurian Candidate was an early 60s flick starring Frank Sinatra as a POW from the Korean War who was brainwashed to be an assassin then sent back to the US to kill. He was “triggered” by a Queen of Diamonds playing card.

There’s just too much here that feels like an homage to that classic movie. Helena thinks of herself as a queen and certainly owns a slew of diamonds and if “General Hospital” rumors are correct, there is much more to little Jake than we know.

Think about it… He’s been glaring in a most terrifying manner when things don’t go his way and he brutally attacked his brother Cameron when he scared Jake with his Halloween mask. The kid seems like a weapon just waiting to be fired.

And likely it’s Helena that has her finger on the trigger… This poses other questions. Does little Jake have a microchip in his brain like his father Jason did? Did Helena intend them to be father-son assassins wreaking havoc in Port Charles?

And when Jason heads to Cassadine Island later this week looking for answers about his amnesia and the brain games Helena played with him, will he also find out some surprising secrets about experiments also performed on his son?

You also have to wonder whether Robin Scorpio (Kimberly McCullough) was involved in all of this. She’s a talented neuro-scientists with a specialization in grey matter, so did she develop the protocols used on both Jason and his son Jake?

And finally, when Jason turns up on Cassadine Island demanding answers from Helena, will this drive the elder evil Cassadine to trigger Jake to attack? We do know that Jake knows things he should not – and may know more than he’s said.

Heaven knows how Helena had him conditioned while he was under her “care” on the island. Just because the boy doesn’t have any physical scars on him doesn’t mean he’s not terribly damaged in other ways – but no one has made the effort to find out.

Don’t miss a moment of GH in the coming weeks as the big and little Jake storylines unfold – and be sure to check back often with CDL for detailed daily “General Hospital” spoilers and much more!