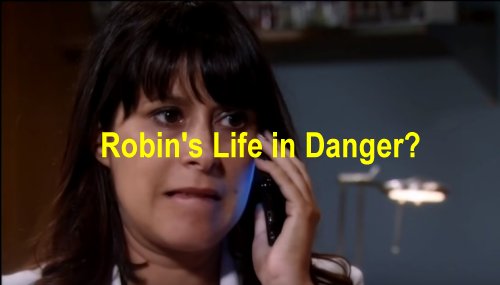 But then Robin’s phone was taken away by the henchmen guarding her and Robin was forced to watch on live stream video as her daughter Emma Drake (Brooklyn Rae Silzer) was almost abducted in a Port Charles park. Robin was terrified.

By all counts, it was Helena Cassadine (Constance Towers) that was holding Robin captive. Robin was obviously doing research in a lab – was she searching for a way to save Helena’s life? And now that Helena is dead, that means Robin failed.

Is Robin’s life now also at risk? Who inherited Helena’s evil Cassadine research facility? Seems like it would be Nikolas Cassadine (Tyler Christopher) which makes you wonder if Nikolas has known where Robin was all along.

If Nikolas is in charge of the Cassadine empire now, shouldn’t Robin go free? Or did Helena live a kill order instructing that if she perished, Robin and her research should be terminated? How much danger is Robin in and who will save her?

“General Hospital” spoilers reveal that Robert Scorpio (Tristan Rogers) is back in December and that he will be working with Anna Devane (Finola Hughes) to save a life. Could that life be their daughter’s? Plus Patrick is leaving Port Charles soon.

Will Anna and Robert save Robin so she can leave town with Patrick and Emma? While fans love Brooklyn Rae Silzer, you have to wonder if she could be SORAd soon. Josslyn Jacks (Eden McCoy) was just SORAd to replace the younger Hannah Nordberg.

Could GH showrunners be preparing to SORA all of the younger generation of Port Charles? Let’s hope not. Rival GH gossip indicates that Patrick and Robin might leave Emma in town with Grandma Anna while they go do something together.

Perhaps Patrick and Robin will leave town and volunteer with Doctors without Borders so they can reappear at any time. Showrunners have promised closure on the Patrick and Robin story but let’s hope closure does not mean an end.

For now, what we do know is that Robin is in peril in parts unknown – but assumed to be holed up in a secret lab in Paris. Gun toting men guard her and she’s been warned not to discuss Jason with anyone. So who will rescue Robin?

There’s always a chance, since Robin is a sharp cookie and very brave, that she could rescue herself and show up looking the worse for wear, but still alive. And with Emma about to lose Sam Morgan (Kelly Monaco), Robin showing up would be timely.

Emma has lost Robin then Sabrina Santiago (Teresa Castillo) and is about to lose Sam when she and Patrick split. Poor Emma can’t seem to keep a mom in her life – so maybe leaving her with Anna, who seems settled, is for the best.

What do you think GH fans? Who will rescue Robin or will she bravely rescue herself? And do you think Robin and Patrick will leave town together – and will they take daughter Emma along? Share your thoughts in the comments below.

And be sure to check back often with CDL for tons more “General Hospital” spoilers, gossip and more.