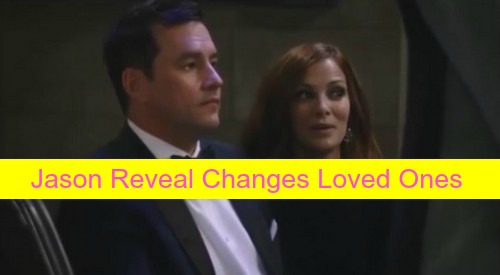 The Jake reveal is still unfolding and “General Hospital” (GH) spoilers indicate that when the truth comes out, all will not be resolved – far from it! Rather than offering healing and closure to Jason Morgan’s loved ones, Jake Doe (Billy Miller) may just break a few hearts along the way. Here’s a look at some of the revelations that may be coming to Port Charles and the impact it could have on Jason’s loved ones.

Carly Corinthos (Laura Wright) may be one of the few who comes out of this reveal relatively unscathed. Carly has felt an affinity for Jake since he came to Port Charles, even when he was still a dangerous unknown entity operating at the behest of Helena Cassadine (Constance Towers).

Carly has been his champion for months now so, for Carly, this revelation clicks things together for her. She has accepted him as is and will continue to. But Carly’s husband could throw a wrench into her BFF relationship.

Sonny Corinthos (Maurice Benard) will not handle this revelation nearly so well. For months, Sonny has pretty much despised Jake and hasn’t wanted him around Carly. Now that Jake saved Sonny’s life, his perception is changing and, when Jake is revealed as Jason, Sonny will feel vindicated that he knew it was Jason saving him at the warehouse.

But he will not be happy when Jake doesn’t remember their former closeness and Jason does not want to return to the mob life alongside Sonny.

The new Jason will be much more like the pre-accident Jason Quartermaine who was not brain damaged and emotionally obtuse enough to become a killer. Jake loathes the dangerous skills he possesses as Jason.

Will he also loathe Sonny for introducing him to a life of crime and violence? Jason could very well reject Sonny’s lifestyle while still politely acknowledging they had some sort of camaraderie in the past that Jason simply does not remember. How crushed would Sonny be that Jason is back but not part of his life?

The Quartermaines may come out on the winning side of this revelation in some very important ways. Monica Quartermaine (Leslie Charleson) and Tracy Quartermaine (Jane Elliot) will fully embrace Jake as Jason and want him back in their lives.

They may even try to lure him back to the Q Mansion while he sorts out his complicated new life. You’ll remember that Jake has felt a strong pull towards that house since the first time he came there – was that foreshadowing that he belongs there with them?

Jason’s sons will also be big winners in this reveal. No matter what happens with the women in Jake’s life, Jason will want to be with his sons and get to know them. Little Danny Morgan and Jake Spencer (James Nigbor) will enjoy the kindler, gentler restored Jason who no longer poses a risk to his children because of his mob lifestyle.

It was the mob that kept him apart from his children and once that’s explained to him, this should resolve Jason to never go back to that lifestyle.

The two that we anticipate to be hardest hit by the Jake revelation are Sam Morgan (Kelly Monaco) and Liz Webber (Rebecca Herbst).

Sam, of course, will be stunned by the news and Liz will be terrified that this will cost her the man she loves and has lost so many times before. But, at first, all Jake will have is the name ‘Jason Morgan’ and it won’t mean that his memories are back. We can expect that it will take time to unlock those – the writers can play that out as long as they like.

Heck, they could even leave Jake with no Jason memories indefinitely which would allow them a clean slate to write with because they can ignore much of the character history and have much more creative freedom.

So if you were expecting Jake to hear the name ‘Jason Morgan’ and it all come flooding back and him to rush into Sam’s arms, you will likely be disappointed (as will Sam). We do know that no matter what, Sam will dump Patrick Drake (Jason Thompson) after the revelation.

There are some “General Hospital” spoilers that predict that Sam and Patrick may already be married thanks to an eager elopement. That won’t matter to Sam. She will break it off with Patrick in anticipation of reuniting with her husband.

And once Sam finds out Liz knew all along, all hell will break loose. However, this may not work out the way she wants. Sam may be shocked that Jake could defend Liz against Sam after all that Liz has done for him over the months – and because Jake loves Liz.

There’s a potential here for Sam to lose both Patrick and Jason in coming weeks. Of course, Liz could lose him too. What we may see is that Jake will take a step back from both Liz and Sam to try and sort out who he is and what his new reality means for his future.

We do know that Billy Miller is heading out of Port Charles for a few weeks’ vacation in the coming months, so we’ll see him exit and he will likely come back with some decisions made as to his romantic future.

Jake could even dump them both because there’s just too much controversy between Sam and Liz and he loves them both and doesn’t want to rip them apart by choosing – so he may walk away from them both. Wouldn’t that be insane?

It would certainly open the show up to all sorts of new romantic opportunities for all three of these characters. The bottom line is, Jean Passanante and Shelly Altman have clearly thrown out Ron Carlivati’s playbook and are carving bold new script choices here.

Immediately after the reveal though, what we’ll see is that Jake will feel overwhelmed. He’ll be pulled by Sam, Liz, Sonny, and the Quartermaines. We do know he’s going to lash out at Nikolas Cassadine (Tyler Christopher) but then it’s likely more of his struggle to cope with the revelation will be internalized and Carly will be there to help him through. But those who knew Jason before will have to adjust their expectations and may be hurt by the choices Jake makes as he navigates his new reality.

Stay tuned to CDL for more “General Hospital” spoilers on Jake’s reveal and the other major plotlines unfolding right now – plus detailed daily spoilers and insights.