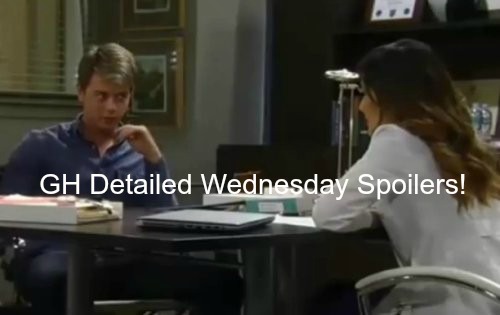 “General Hospital” (GH) spoilers indicate that Sabrina Santiago (Teresa Castillo) will not be able to keep up her pregnancy lies much longer. Michael Quartermaine (Chad Duell) has questions and he wants answers stat.

When Sabrina tries to cut him off when they see Dr Kelly Lee (Minae Noji), Michael gets frustrated then suspicious. Her actions will lead Michael to seek his grandmother’s professional opinion. Michael shows the sonogram to Monica Quartermaine (Leslie Charleson) who is stunned.

Also dealing with medical issues are Carly Corinthos (Laura Wright) and Morgan Corinthos (Bryan Craig). Carly thinks Morgan is mismanaging his medication and she’s not wrong. However, you can’t come head on at Morgan and expect good results.

Morgan will blow up at his mother, throw his pills around, tell Carly to count them and generally act like the mental mess that he is. Can Carly talk him down? Will Morgan walk away from both of his parents in frustration? And if so, what’s next for Morgan?

Could Morgan turn back to Ava Jerome (Maura West)? By the end of the week, someone will walk in on Ava and Paul Hornsby (Richard Burgi) in the sack. Is it Morgan who still knows her security codes? Before Ava and Paul get intimate again, though, he’s going to make her very jealous.

Tracy Quartermaine (Jane Elliot) and Paul share a nice walk in the park then sit and talk. Tracy admits she’s got feelings for him again and may even be falling for him. What will Paul do? He can’t alienate Tracy or Ava either one…

Ava sees them talking and makes the assumption that Paul is also bedding Tracy. Later, Paul will have to work to convince Ava that he’s all about her, but the damage is done. Ava won’t be under his thumb much longer.

Lonely Ava later tells Kiki Jerome (Hayley Erin) that baby Avery needs her big sister. Ava tries an emotional appeal and it looks like things may begin to warm up between them by Christmas. Also on the Paul storyline, Anna Devane (Finola Hughes) is hot on his tail.

Anna and Mac Scorpio (John J York) discuss how to nail Paul and figure out exactly what he’s planning. They’ll look into his personal life and his activities at the Port Charles police department. Too bad Anna will soon be distracted from the case by a trip to save her daughter.

Patrick Drake (Jason Thompson) will take Emma Drake (Brooklyn Rae Silzer) to Paris to hunt for Robin Scorpio (Kimberly McCullough) after Emma says she really needs her mom and they decide things may not be quite right where Robin is concerned.

Meanwhile, Robin may run out of time before they can find her. Jerry Jacks (Sebastian Roche) tells Robin that her time is up. Did she make any progress on her immortality research? Or is Jerry about to end her life because she failed? It does not look good.

Good thing Robert Scorpio (Tristan Rogers) will join the hunt and meet up with Patrick and Anna on Thursday, December 17, Rogers first return air date on GH for this short guest arc. With Anna and Robert teamed up, Robin will be safe in no time.

Franco (Roger Howarth) and Liz Webber (Rebecca Herbst) may continue the meeting of the “traumatized by Carly” support group. Franco offers Liz kindness when most people in Port Charles think she’s the devil. She should not turn her back on any friendship at this point.

Will Dante Falconeri (Dominic Zamprogna) try and put some space between him and Valerie Spencer (Brytni Sarpi) because he regrets moving so fast and wants his old life back? Or will Valerie’s mention of the handsome man who helped her make Dante jealous?

Also, we have NOT seen the end of that ugly Christmas sweater that Olivia Falconeri (Lisa LoCicero) bought for Julian Jerome (William deVry). Since Julian invited Olivia and Leo for Christmas – without telling Alexis Davis (Nancy Lee Grahn) – that’s awkward.

More awkward still will be when Julian, Olivia and Leo put on their matching sweaters and look like a real family. That will kill Alexis even though, by then, Julian would have asked Alexis to marry him. Is this the beginning of the end for Julexis and the start of Jolivia?

Lots happening on the Wednesday, December 16 episode of GH – watch the show then come back to CDL for more “General Hospital” spoilers, gossip and news.