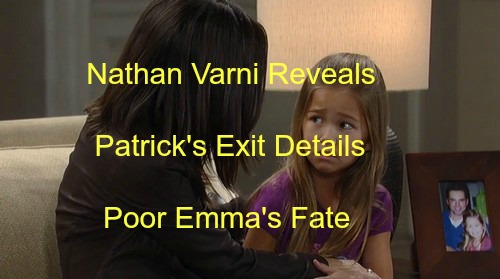 “General Hospital” (GH) spoilers tease that Patrick Drake (Jason Thompson) will not be in Port Charles much longer. We all know that Thompson is headed to Genoa City to pick up the Billy Abbott mantle,  as CDL reported weeks before the official announcement, but how will the exit happen and what about Patrick’s daughter Emma Drake (Brooklyn Rae Silzer)?

Showrunner Nathan Varni dished about GH in general – and Jason Thompson specifically – on the Weekdays with Murph podcast. We know that Thompson signed a contract extension to allow him to finish out Patrick’s storyline but as of November 20th, he’s off set and done filming.

What we do know is that Patrick Drake will NOT be in Port Charles for Christmas. However, since there’s an adventure coming for the Scorpio-Drakes, that doesn’t mean we won’t see Patrick past the New Year just in another locale, perhaps fighting for the life of his ex-wife.

The scoop from Nathan Varni is that there’s “going to be a big story” that centers around Patrick’s exit from the Port Charles scene. Later in the week of December 7-11, Emma Drake (Brooklyn Rae Silzer) will call up Robin Scorpio (Kimberly McCullough) and that sets off the adventure.

Emma gets the sense her mom Robin is in trouble and they loop in Anna Devane (Finola Hughes) on the danger that Robin may be facing. Then the following week, on December 17, Robert Scorpio (Tristan Rogers) will be introduced into the storyline.

“General Hospital” spoilers tease that Patrick, Anna, Robert and Emma will head out to help Robin. Sam Morgan (Kelly Monaco), however, will be left in the dust as Patrick breaks things off with Sam because she’s clearly not over Jason Morgan (Billy Miller).

Robin is being held somewhere, by someone tied to the Cassadines. She has failed in some task – perhaps curing Helena Cassadine (Constance Towers) of whatever killed her – and this has put her life at risk. The Scorpio-Drakes will set out to find Robin and resolve this crisis.

Here’s what else we know. Anna and Emma will come back to Port Charles together and the other three – Robert, Robin and Patrick will be gone when it all works out. Tristan Rogers is still on cast at “The Young and the Restless” even though his role has been cut back somewhat.

Jason Thompson will be joining his former TV father-in-law (Tristan Rogers) in Genoa City as Billy Abbott. And Kimberly McCullough will be back to her life behind the camera – directing episodes of Pretty Little Liar plus other directing and producing work.

But with Helena dead, what nemesis will Patrick and crew face? Is there another Cassadine in the mix? Is Nikolas Cassadine (Tyler Christopher) somehow involved and has known Robin was being held? Is Robin really in Paris or was she being held at a Cassadine compound?

Here’s some GH spoilers, by date, on what we can expect for the Patrick Drake exit storyline:
On December 10, Patrick tries to cheer up Emma who is devastated that Patrick and Sam’s relationship is crumbling and lets her call Robin.

On December 16, Patrick and Emma get a clue about what’s happening with Robin and why she’s at risk.

On December 17, Anna and Patrick get help from Robert in their search for where Robin really is and who’s holding her.

On December 18, Robin’s family is close to the truth and will begin packing up and making plans to go rescue the missing doc.

In the end, Patrick should not die as part of this rescue attempt. By all accounts, Varni is leaving the role open for a possible later recast or a return if Jason Thompson plays out over at Y&R. What’s more likely is Robin and Patrick will go off on an adventure.

But, you never know, Patrick could be put on ice (literally) if he’s injured in the rescue and Robin may put him in cold storage and work on reviving him at a lab facility. That would literally put Patrick’s character on ice for a future reveal.

Plus all the Cassadine plots involve something chilly! Nathan Varni promised about Patrick’s final GH plot, “You guys will be happy” then added “We’re losing a tremendous talent on the show.” After a decade in scrubs, fans will definitely miss Jason Thompson as Patrick Drake.