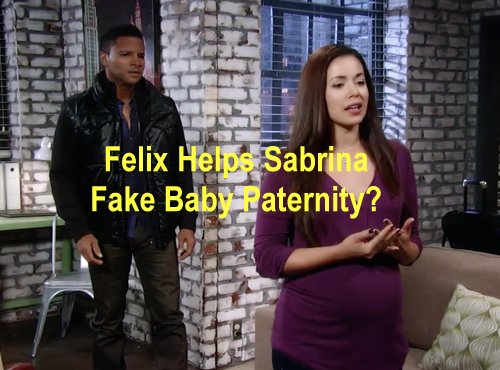 Sabrina had just worked up the nerve to tell Michael he’s not the father of her baby but then he was called away – and Carlos showed back up from the dead. Carlos also assumed he was Sabrina’s baby daddy and that’s the problem.

Sabrina doesn’t want to lie to Michael, but that’s a much better alternative than a known assassin, mob man and wanted criminal being the father of her child. Now that Sabrina has committed to lying to both men, she needs a plan.

A major obstacle is that Sabrina is so far along that Carlos thinks it’s obvious the baby is his and nothing Sabrina says will convince him otherwise. Sabrina needs proof – but how can she prove what’s not true? Maybe a medical buddy can help.

This week, watch for Sabrina to turn to good friend Felix DuBois (Marc Samuel) to help her carry out her ruse. Felix should be able to help Sabrina fake enough medical “evidence” to convince both Michael and Carlos about the baby.

Maybe they’ll use someone else’s sonogram that’s not as far along to convince Michael and Carlos – or maybe they’ll use Sabrina’s but fake the data. Or Felix could run the sonogram and just say what he and Sabrina agreed he would.

No matter what she has to do, Sabrina wants to protect her unborn child. After she lost little Gabriel so tragically, Sabrina will not put her child at risk. Bottom line, Michael is a much better prospect for Sabrina than Carlos.

No, Sabrina’s not after Michael’s money or name, she’s after what he represents – safety for her child and not growing up with a criminal’s name and reputation attached to the unborn baby. Simply put, Sabrina cannot lose another child.

But even confronted with evidence that he’s not the father of Sabrina’s baby, will Carlos give up gracefully and leave Sabrina in peace? No chance! Carlos won’t leave Port Charles and it’s doubtful he’ll believe Sabrina.

Will Carlos reveal himself to Michael so he can tell the Quartermaine heir that he and Sabrina slept together? Will it be Carlos that reveals Sabrina’s secret to Michael – or will she finally offer the truth herself out of guilt?

And one last thought – any chance that Sabrina and Felix could be fired for monkeying around with medical info? Nah. It’s General Hospital – someone’s always faking DNA and paternity tests so hopefully they won’t get in trouble.

Check back to CDL for more “General Hospital” spoilers on the Michael-Sabrina-Carlos baby triangle and much more!