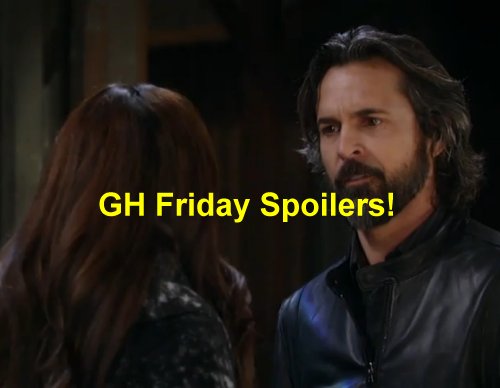 “General Hospital” (GH) spoilers reveal time is running out for Liz Webber (Rebecca Herbst) and Nikolas Cassadine (Tyler Christopher). A truth bomb is ticking that will blow these two up – and the explosion will happen soon.

First Nikolas warns Liz that Sam Morgan (Kelly Monaco) is not letting this Jason Morgan (Billy Miller) thing go. Liz is scared, but at least she’s prepared when Sam comes by and gets in her face about lying to Jason.

But really, does Sam know? Last we saw, she knew there was a secret Liz and Laura Spencer (Genie Francis) are keeping and it has to do with Jason, but she doesn’t know what it is. Liz will figure this out but still knows things are dire.

Liz will steel herself for a confession to Jason. Out at Wyndemere, Nikolas will be blown away by a stunning revelation from Hayden Barnes (Rebecca Budig). Hayden gets word from Curtis (Donnell Turner) that there was a second bullet.

The ballistics will match Shawn’s gun which means Shawn missed Jason and someone else put a bullet in her. She may not know the shooter yet, but Hayden knows she was set up. What will Nikolas do to protect himself? How far will he go?

Jason and Sam will consult divorce attorneys today about ending their union, but a split is not what’s on Sam’s mind. She still wants Jason and Alexis Davis (Nancy Lee Grahn) reminds her that the path she’s on could lead to a split with Patrick.

After meeting with Hayden, Curtis may run into Jordan Ashford (Vinessa Antoine) and “General Hospital” spoilers reveal that Jordan may know both Curtis and Dr Andre Maddox (Anthony Montgomery).

Curtis is a pal of Shawn Butler’s (Sean Blakemore) so that makes sense, but is Andre a possible past flame of Jordan’s? Whomever she runs into – Curtis or Andre – it will be a blast from her past that surprises her.

Also on the docks is Sabrina Santiago (Teresa Castillo) who has to fight off Carlos Rivera (Jeffrey Vincent Parise) who tries to drag her away with him. Will Sabrina and her baby be harmed by Carlos? Will Anna Devane (Finola Hughes) save Sabrina?

Anna will end up in danger herself, but is it Carlos who attacks her? Paul Hornsby (Richard Burgi) will make an appearance and watches the Carlos-Sabrina attack and he may (or may not) intervene. Paul and Carlos will talk soon and we’ll see they are conspiring together.

Was Paul the one who helped Carlos fake his death? Paul makes it clear to Carlos that he’s running the mob show in Port Charles now and Carlos better watch out. If Paul intervenes with Carlos and Sabrina, he could expose himself. What will the dodgy DA do?

Paul was on the docks looking for Anna. How much will Anna reveal that she knows and will she threaten Paul as he’s threatened her before? Or will Anna play her cards close to the vest and wait until she has more info before she makes a move?

Franco (Roger Howarth) still doesn’t trust Julian Jerome (William deVry) and will put the media mogul to the test to see if he’s really reformed. Problem is, this test could backfire and Julian is tempted to go OG on Franco over it.

All this and more on the cliffhanger Friday GH on December 4th. Watch then check back with CDL for more “General Hospital” spoilers, gossip and more.