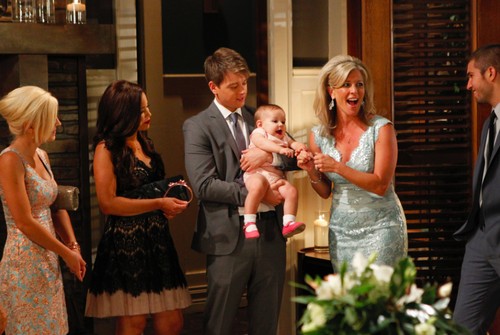 According to “General Hospital” spoilers, Wednesday, September 2 is the big day (yet again) for Sonny Corinthos (Maurice Benard) and Carly Corinthos (Laura Wright). It’s their fifth official wedding and the second for Laura Wright in the role of Carly. The first Laura Wright wedding was pretty terrible – she cried the whole way through the ceremony – so this wedding can’t be any worse, no matter what happens.

Here’s a look ahead at Sonny and Carly’s upcoming wedding ceremony. Although the wedding is set for September 2, scenes will air from Wednesday through Friday then wrap up on Monday, September 7.

First, Sonny and Carly will be surprised and thrilled that Kristina Corinthos-Davis (Lexi Ainsworth) is back in Port Charles for their wedding. At least the wedding is her excuse – looks like she’s there to make trouble and will start flirting with TJ Ashford (Tequan Richmond) right off the bat which will drive his GF Molly Lansing-Davis (Haley Pullos) crazy.

Carly’s mom Bobbie Spencer (Jaclyn Zeman) will be on hand to support her daughter and will be in stunning black – is she recycling a funeral dress. Thumbs down on Bobbie’s ensemble. Could it be a foreshadowing that this marriage indicates a death knell? Baby Avery, however, will look adorable in her little pink dress and shoes and her toothy drooling little smile.

Second, Sonny and Carly will have one wedding wish come true – son Michael Quartermaine (Chad Duell) will have a change of heart and attend the ceremony hand in hand with his sweetie Sabrina Santiago (Teresa Castillo). Michael isn’t quite ready to forget, but he will forgive enough to be present for his parents’ latest remarriage.

Carly will get some gifts that she appreciates from her mom and some other women in her life. Also on hand will be Maxie Jones (Kirsten Storms) who has planned the whole celebration and reception taking place at Sonny’s house. Sonny’s son Dante Falconeri (Dominic Zamprogna) and wife Lulu Spencer (Emme Rylan) are also there which seems nice except that…

Valerie Spencer (Brytni Sarpi) is also there. Will the news of Dante and Val shagging be revealed at the ceremony? Hopefully not, but there are some “General Hospital” rumors that Val’s Aunt Bobbie will notice that Valerie seems to be getting a little thick around the middle – will it be Bobbie that figures out that Dante knocked Val up? At least Valerie looks good in her little polka dot dress.

Lulu will happily play with baby Avery and will have her thinking about implanting the last embryo she and Dante have in storage so they can have another baby. Michael also gets some face time with baby Avery and Sabrina looks color coordinated to the baby with her pink and black lace dress – also watch Castillo hold her purse in front of her baby bump.

“General Hospital” rumors indicate that TPTB may write Castillo’s pregnancy into the storyline, but for now, Sabrina has to keep that bump covered until (and if) the plot line changes. Morgan Corinthos (Bryan Craig) is also there and he seems to be okay – at least for a while. There’s a very good chance that Morgan will freak out and disrupt the ceremony unless Michael intervenes.

Morgan puts on a brave face but is crumbling inside and looks to big brother Michael for reassurance. Michael and Sabrina will talk about how he can help. Morgan is worried that he’s falling apart and heading down the same road as Sonny with his bipolar craziness, but Michael will try and make him feel better. Expect some sort of blow up from Morgan before it’s all said and done.

Carly chose a beautiful silvery white knee length number (on Maxie’s advice) and spangly silver high heel sandals. Her dress is fine – no wedding day drama there. However, the wedding cake is a spot of trouble. TJ realizes there’s an issue and tries to get Molly to help him deal with it. TJ will have to call Sonny for some help – is it cake related or a mob problem?

One outrageous rumor that likely won’t happen, but is fine to entertain is that Jax (Ingo Rademacher) and Brenda Barrett (Vanessa Marcil) will crash the wedding. There is also the potential for Sonny’s yet unseen new mob enemy to cause trouble at the wedding. We may also see some Dante and Valerie drama, Morgan and Kiki Jerome (Hayley Erin) shenanigans and perhaps even some Ava Jerome (Maura West) trouble.

We all know this wedding won’t go off without some sort of major ordeal – the real question is whether Sonny and Carly will make it to their I Do’s or if the drama is so extensive that the wedding is ruined.